Founded in 2012, Barberette was one of the first gender-free hair salons to be established in the UK. Speaking to Creative HEAD, the team share the concept behind their forward-thinking salon and the importance of gender neutrality 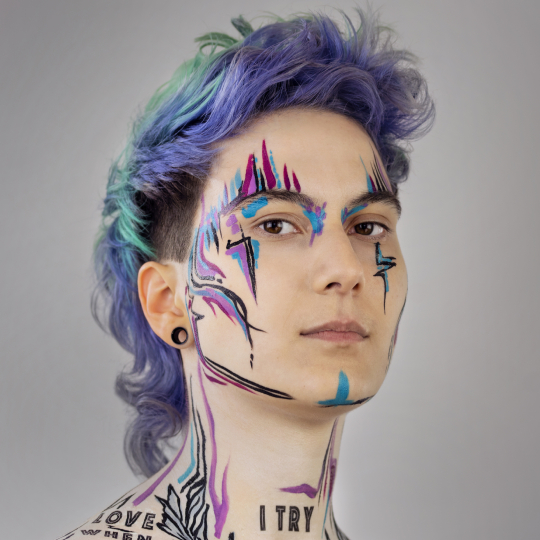 “We don’t believe in paying extra for your gender, so our price list is solely in line with the style and length you’re after. Since the salon was founded 10 years ago, the concept of gender neutrality has become a much more prominent talking point – not only within the hairdressing and barbering world, but in society in general,” says marketing manager Rachel Hardwick.

“Our goal has always been that each and every one of our clients walks away feeling accepted and 100 per cent themselves. Our no-judgement policy means that regardless of your gender expression or sexuality, you’ll leave our salon with the hairstyle you want, no questions asked. Acting as a safe space and hub for the LGBTQIA+ community, we regularly work with charities, queer artists and other organisations that help promote the work and well-being of members of our community. We are constantly looking for meaningful ways to give back, as well as just by cutting hair!”

“We decided to undertake this photo series as a way to feature some of the brilliant transgender, non-binary and gender-nonconforming people that visit Barberette and to tell their personal stories of self-discovery through experimenting with their own personal style and hair. Before we did the photoshoot, we interviewed our models about the importance of not only being able to access LGBTQ+ friendly spaces to get their hair cut, but also knowing that they won’t be judged for asking for what they want.” 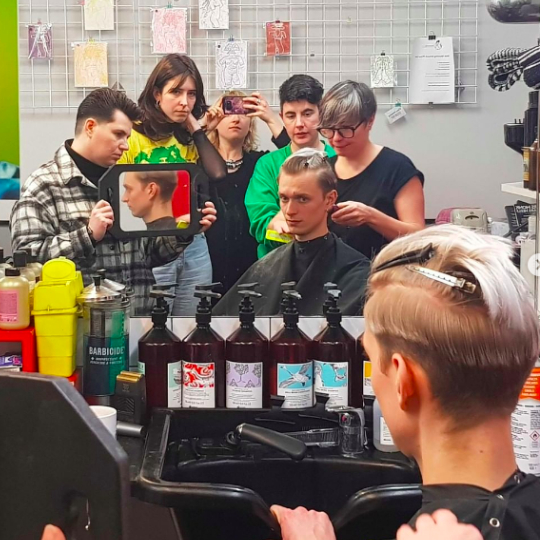 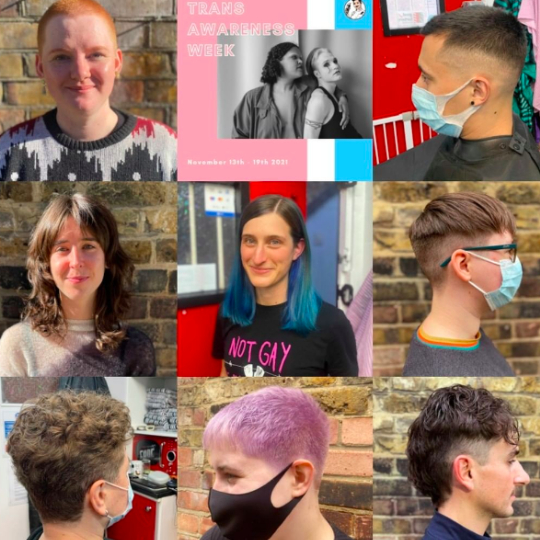 The project is shot by Rachel and showcases hair by salon manager, Lauren Thwaites. Make-up artist and body painter, Pixie Lawrie, also collaborated on the shoot, incorporating quotes from the models’ interviews by painting them directly onto their skin.

This series of creative portraits explore how colour and cut have helped enable those from the LGBTQ+ community to express their gender and identity. The idea behind the visuals is that they are re-writing their gender identity, hence the words form part of the picture. In their own words, the models explain what these portraits mean to them. 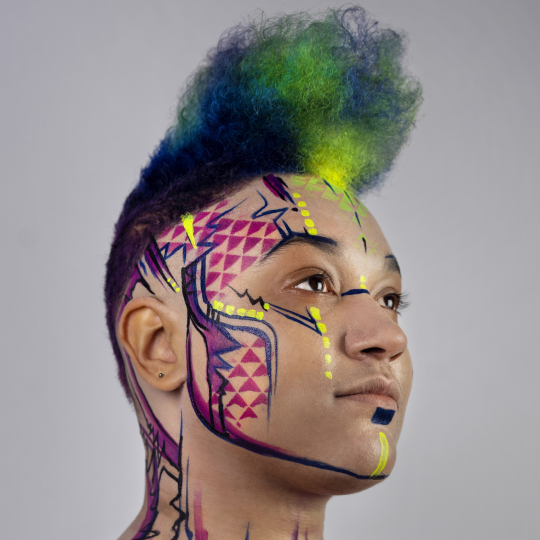 “My hair and style have always been part and parcel of my identity, but the biggest change I made was going in for the ‘big chop’ when I came out as non-binary in 2018.

Being someone with afro-mixed hair, my hair in its natural form always attracted a lot of attention. Adding in being visibly queer, sometimes I’d feel uneasy about dressing up, in case it got me unwanted attention.”

“I try to use my hair and personal style to create gender confusion, and I love it when people look at me puzzled, trying to figure out ‘what’ I could be. I struggled with expressing myself growing up in a homophobic family, and being one of the only queer kids in school.

However, I overcame this when I left for university and decided to spend that sweet student finance money on giving myself a new look. At the hospital, where I work as a radiographer, I hope my queer look brings a sense of comfort to any other LGBT staff and patients, so they can feel they’re not alone.” 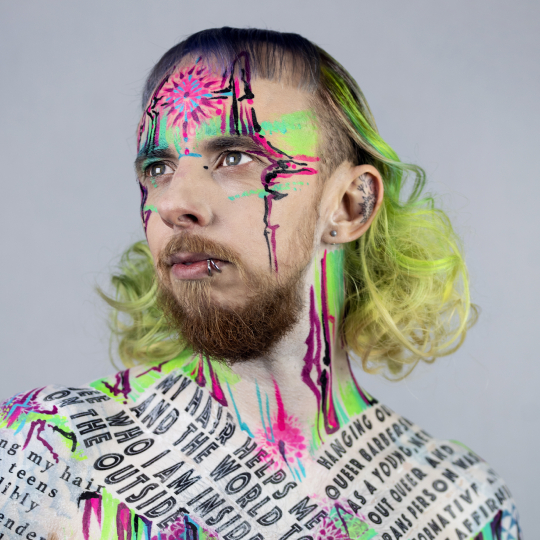 “I’ve been dying my hair since my early teens, but it’s been incredibly important as my gender identity has evolved – my hair helps me and the world to see who I am inside, on the outside.

Hanging out in queer barbershops (such as Barberette) as a young and newly-out queer and trans person was formative and so self-affirming! Now after a decade on testosterone and forming an identity that’s much more genderqueer, it’s important for my hair to have a feminine edge to it.” 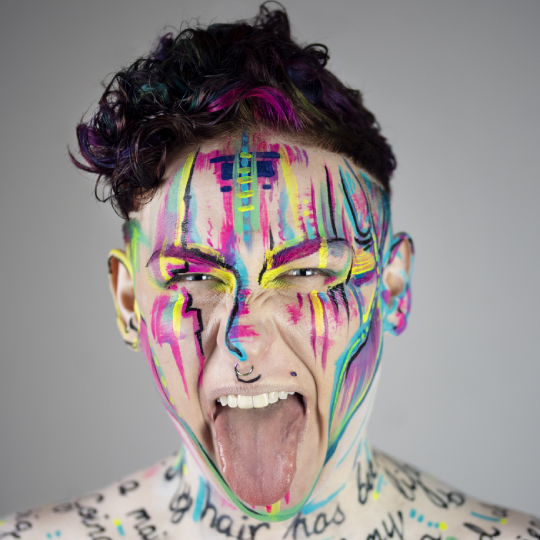 “I recently went from having very ‘femme’ long hair for most of my life to a very short ‘masc’ cut, which was super scary because I didn’t know exactly how it would go. I opted to have Lauren at Barberette do it, and almost cried because it was such an emotional experience putting trust in someone else to help me affirm how I felt inside on the outside.

My hair has been a big part of my life: I’ve coloured it since I was 15, growing it long to hide behind and try to feel less gender dysphoria as a distraction method, and have very very rarely trusted anyone else to cut it.” 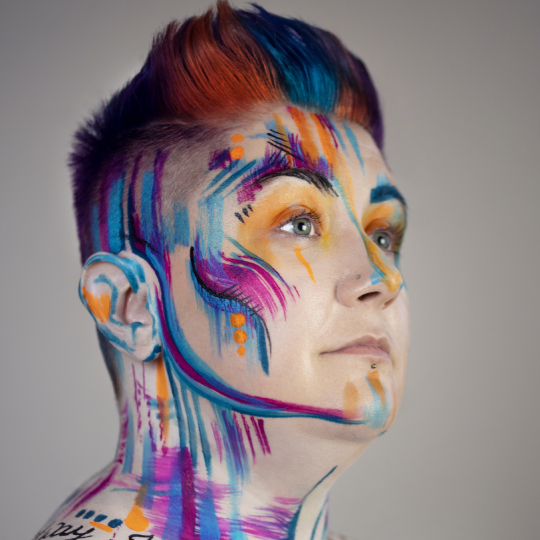 “I’m firmly of the belief that there’s no ‘correct’ way to be non-binary – I can have long hair and still be valid, and I don’t think makeup and clothing should be gendered either.

It’s also so important to me to educate people on their unconscious bias towards disabled people, especially in regards to them just being regular people like anyone else! I want to celebrate the fact I’m disabled and queer and show the world I can still be sexy and desirable and as visibly queer as I want to be.”

With special thanks to Unit M Space for providing the location 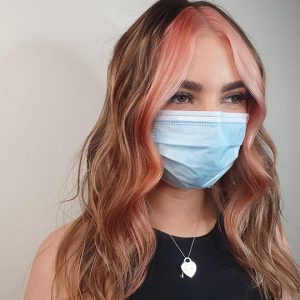 Brush up on the latest trends for S/S21 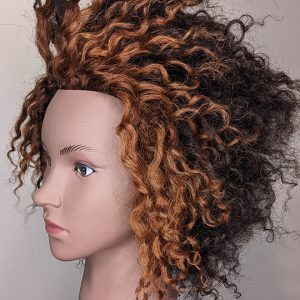 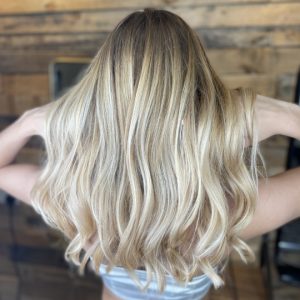 Basking in that golden glow