What do some of the UK’s sharpest creative minds do to get ‘in the zone’? How important is it to stick to a routine when it comes to embarking on an artistic endeavour? And just what do you do when inspiration (or lack of it) hits at the wrong moment? These questions and more were posed to the eight-strong panel at last night’s (January 29) The Coterie: Creative Rituals event in London.

“My own rituals revolve a lot around music,” admitted Gianni as he introduced the night’s theme, “I listen to a lot of film scores and strings when working to get into the right mindset.”

“Oh, I completely live in that world when I’m creating,” added Zoe. “I immerse myself in everything to do with what I’m researching or drawing on – mood boards, references…”

“I get completely obsessed – I AM completely hair obsessed,” said Casey. “I eat, sleep, breath and repeat hair. I don’t have a social life, I have a hair life! I completely believe in the power of rituals, but I also feel there’s huge value in making mistakes (that don’t always turn out to be mistakes) and letting your freak flag fly.”

He also revealed that, Just like Roger Spy, inspiration often hits him just before he falls asleep. “I have to keep a pad and pen by my bed as I’ll often sort of wake up with an idea, scribble it down and fall back to sleep. Sometimes in the morning I look at what I’ve written and I don’t even remember waking, but the need to take stock and process that inspiration later is so strong for me.”

“I find that fascinating,” said Gianni, “because you hear that with musicians and other creatives too. It’s almost like before sleep, the brain is working in a different capacity and that unlocks something creatively.”

Harry Evans admitted that he too has to prepare for inspiration to strike anywhere, but has been drawn into the ritual of filling idle time with sketching – on the train and in any quiet moments – to generate ideas.

“If I could explain what I wanted to convey in words, I wouldn’t be creating… It’s always something instinctual for me,” he told the audience. “But it can be hard to then communicate ideas to people around you when you’ve been so immersed in your creative ritual.”

The entire panel agreed that creativity is somewhat of a balancing act – that you enter into an intense, personal headspace to work on what you want to produce, but then somehow have to convey your goal or vision to others when working as part of a team. “It’s all about working out how you can help them see your world,” agreed Zoe and Adam.

“Sometimes when you first get client feedback and it’s not very positive, it can be disheartening,” Adam explained. “But often it can be incredibly helpful… you both learn to communicate better.”

When Gianni put forward the question of whether anyone’s creative processes and rituals had evolved over the years, Johanna Cree Brown revealed that she had managed to temper her obsessive need to constantly create.

“One thing I’ve learned to do now is switch off a bit now… so I can go back to things and be a bit fresher,” she said. “I totally get the obsession and think it’s vital, but it’s got to be healthy.

“Things like phones are amazing though,” she added. “You see something and you can take a picture or write a note… That’s really added to and helped expand my inspiration and rituals.”

Harry Evans explained that his changing situation – moving from the world of a Central St Martin’s student to fully-fledged designer in the annual fashion season cycle – largely shaped his approach to creative rituals.

“For me, doing a course and working on my MA became a ritual – having a repetitive schedule of classes and projects, the rhythm of the fabric techniques,” he said. “Structure is imposed on you and you have to find ways to jolt yourself into the right headspace to create… break one ritual to embrace another.

“But the fashion world and the schedule to me is pretty ritualistic too,” he continued. “Those making pilgrimages to the shows… that in itself is almost weirdly religious!

“Ultimately, I think having a structure to push against gives you rules to break and be a bit creative. But the new digital world of fashion is less about that structure – you can buy online as soon as a collection is released and the strict pattern of seasons is dissolving. It gives you more freedom than the old way of doing things… I think it’s good to have a deadline, but maybe I need to work towards making my own ones now.”

When the subject of creative blocks was raised, Lan admitted that as a working creative, there’s always the thought that “time is money” and that affects her rituals.

“If I didn’t have deadlines or a time limit, I could go off to museums and just sit there all day staring and absorbing… I love the fantasy of creativity, but it’s different when someone is there telling you ‘This is what you have to do.’ You have to focus when you have a brief because I think as an artist, your mind goes in so many different directions that you could do anything.

“But when you’ve got a really open mind and you don’t hold yourself back, it’s very exciting when you have a direction,” she added. “In that sense, I don’t think about anything until someone tells me about a project and I then I think ‘OK, now I need to focus on that for two day or two weeks and I just think of everything – raid archives, music, art work, film… If I can’t get focused, say if my friends are calling me or I get distracted by Instagram or Facebook, I leave it until it gets closer to the deadline and my heart is then like: ‘OK, I need to do this!’

“You don’t realise, but often during that ‘downtime’ you’re mentally already thinking – you’ve picked up elements like colours and ideas subconsciously without realising. It’s like memories or a visual library that comes back to you. That’s my ritual so that when I sit down to focus, there’s no music or anything… I just get all my references, books and magazines in front of me and pick a point. From there I tend to brainstorm and ideas build, and in the end it’s all about that time I’ve taken for processing.”

“I think in terms of creative blocks, it’s also good to work with a variety of people who you trust and can push you to the limit,” reflected Johanna. “I think working with Roger has also made me a better hairdresser because it makes you consider so much more and look at things in a new way – you can’t hide as much in film.”

Zoe revealed that in her eyes, her rituals became too polished thanks to her position of industry privilege. She explained how it took mentoring at the It List winners’ day to make her aware of how complacent she’d become and how she’d lost sight of what really excited her about creating in the first place. She immediately embarked on her ‘The Influence Project’ – a youth focused look at some of her favourite styling and motifs and not only their origins. but their potential in the future.

“I stripped away the polished results I’d become accustomed to,”  she added. “the resulting films are much more raw… I think we need to question our rituals sometimes to rediscover who we are.”

The night ended with an exclusive premiere of Johanna Cree Brown and Roger Spy’s new film, ‘Rainbow Children’. Conceived as a further exploration of the holographic hair that featured in their previous collaborations ‘Opaline’ and ‘Exotica’, the fun-filled romp focused on the frolicsome interplay of light and colour on both the dazzling metallic wigs and the wardrobe provided by Fyodor Golan.

“It’s like a Dove or Benetton commercial on acid!” Enthused Roger, invoking the diverse line up of models, each of whom was selected due to their limited shoot experience to add an unpolished edge and playful sense of naivety to the finished project. Unicorn and UFO inflatables, kaleidoscopic colour and a jaunty soundtrack plucked from a 1960s Italian-French fantasy-comedy film added a final fabulous flourish to the two minutes of beautifully shot footage, which was bursting with positive energy.

With a promise of more Johanna and Roger projects to come, the audience left on a high, with goody bags stuffed with styling must-haves from the night’s kind sponsors L’Oréal Professionnel. 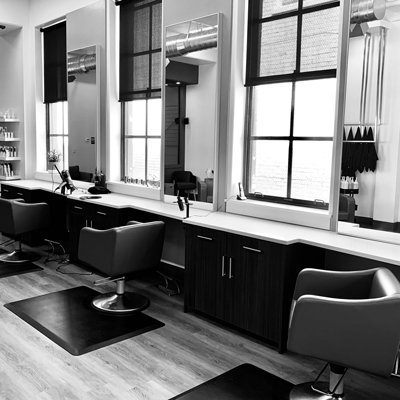