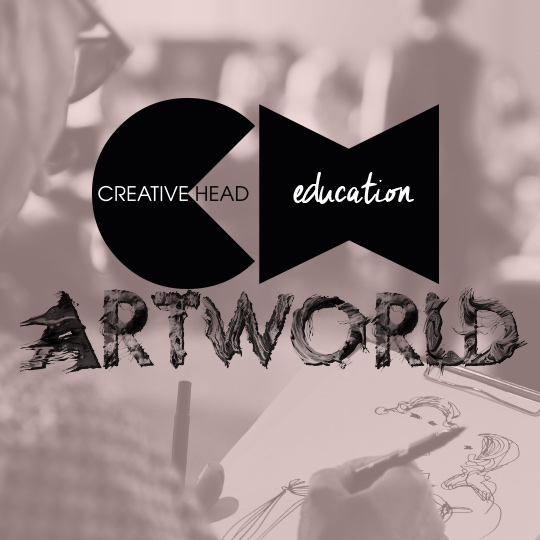 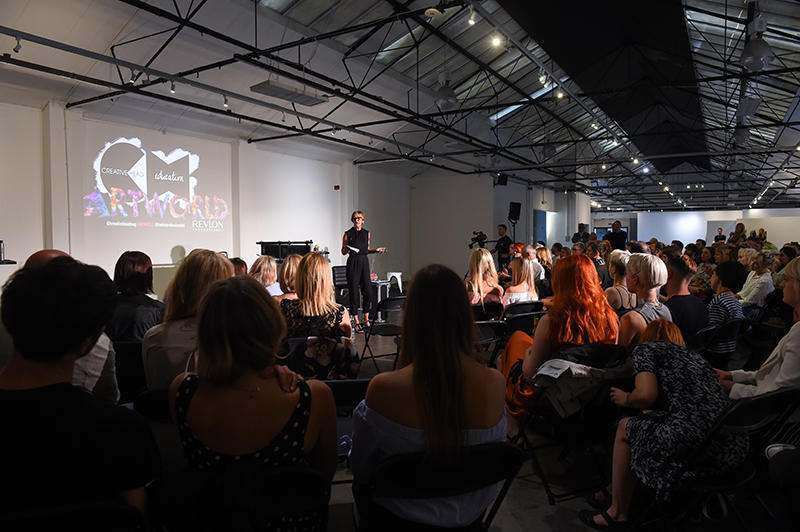 Last night, Creative HEAD Education took London to art school with its first ever live event. Featuring lively discussion and spectacular on stage-styling, ‘ARTWORLD’ (in partnership with Revlon Professional) explored the status of the craft of hairdressing and debated whether it should be considered an art form. 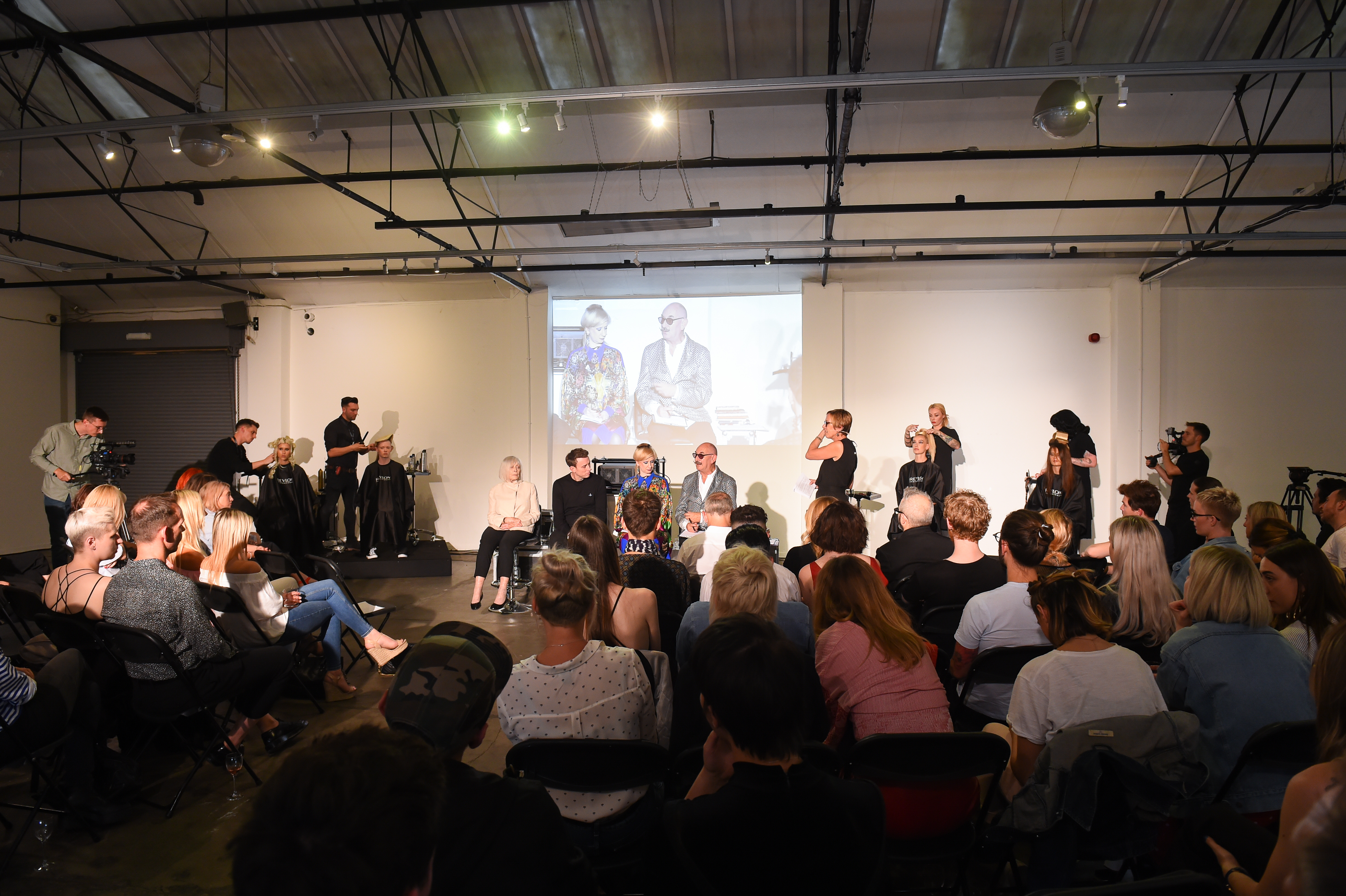 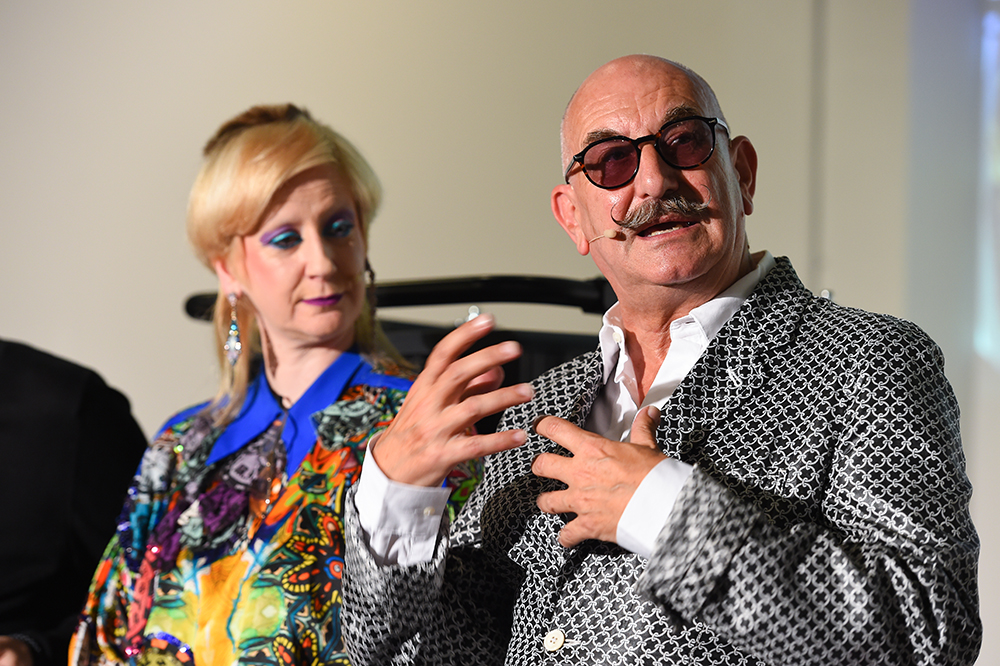 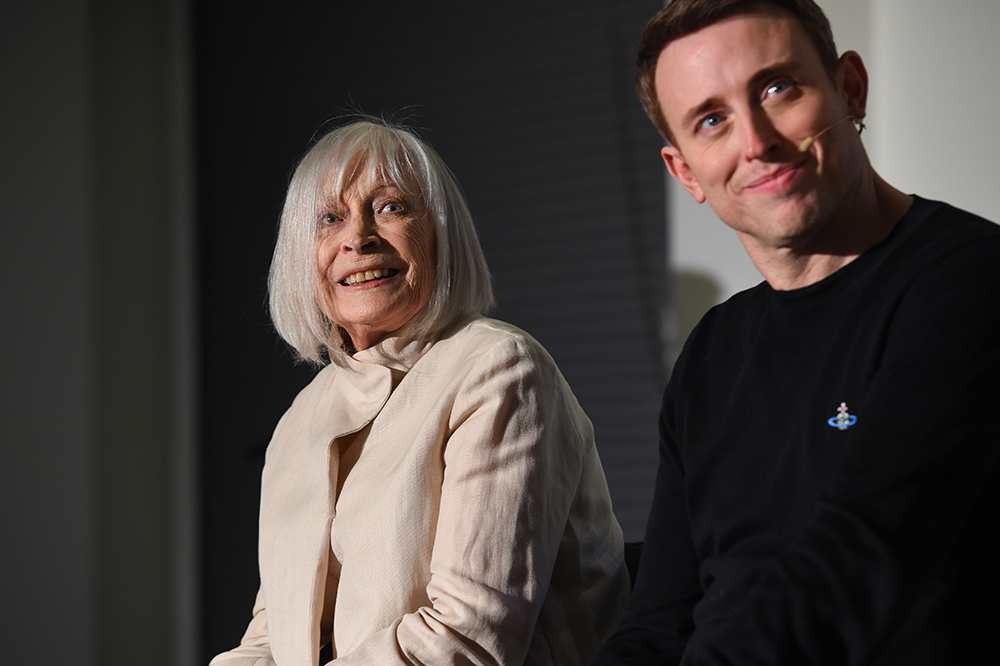 Each of the panellists began the night by explaining what art means to them and how it has shaped their life. “Doris once said to me that if you see something around you as beautiful, that it makes you smile, then that makes it art,” said John. “That’s hairdressing for me. It is a visual expression. In all the years I’ve worked, there have always been art references I turn to.”

“For me, when I sketch, I distil something,” added Tony. “It’s a different version of shorthand. Words don’t always convey what I want to remember from a show… I’m not really conscious I’m doing it – it’s an extension of my thought process.”

“One of my biggest pleasures is feeding my eyes with visuals,” explained Julie. “I see, absorb, digest and exhale… I just want to cover everything in colour and glitter to keep the darkness out.”

Doris, John, Julie and Tony then took it in turns to reveal a work of art that they felt an affinity with, which was to be used as inspiration for a hair look crafted live on stage by members of the Revlon Professional session team. 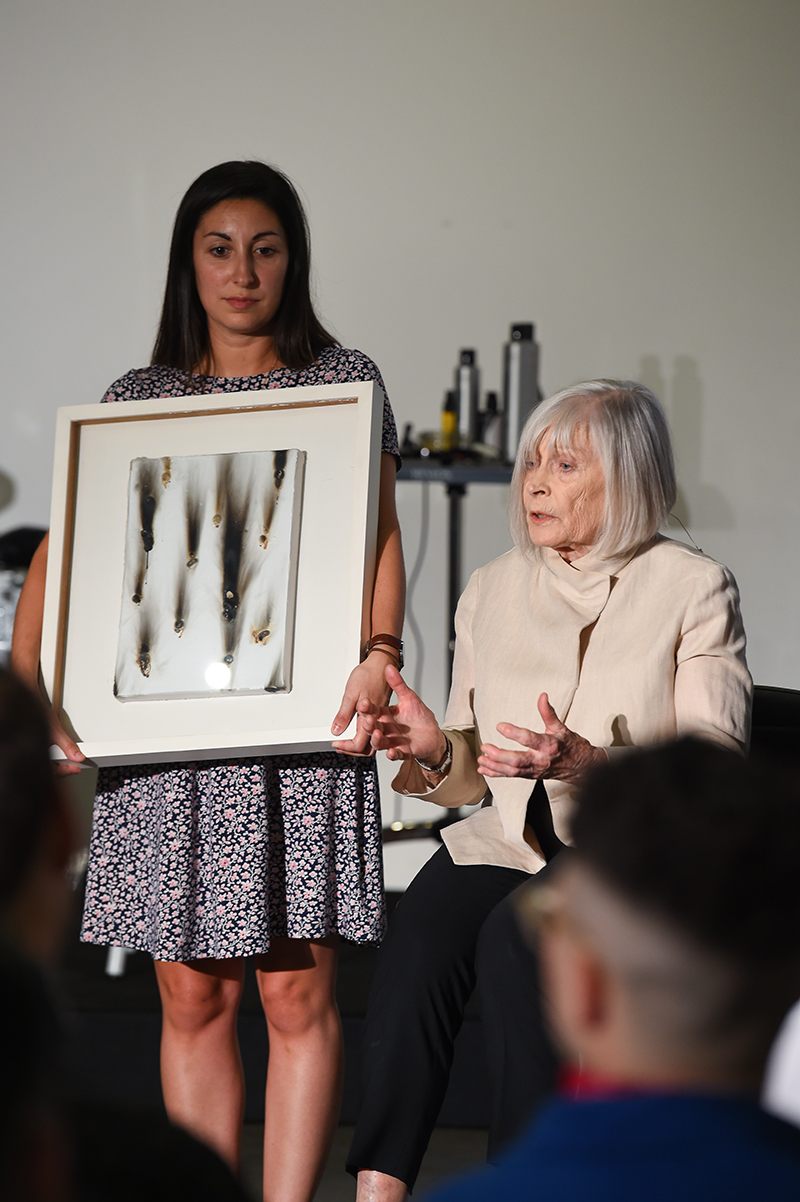 Doris selected a 1990s Damien Hirst original ‘The Only Way is Up’, which featured ‘uppers’ pills stuck to a piece of plaster that had then been set on fire, leaving scorch marks across the white surface. She brought the framed artwork with her, explaining that he had personally gifted it to her and so it held a special place in her heart: “If there was a fire in my studio I would reach for my cat with one hand and this painting with the other!” she told the audience. Emmanuel Esteban from Anne Veck Salons was tasked with replicating its modern, quirky look and feel using the medium of hair. 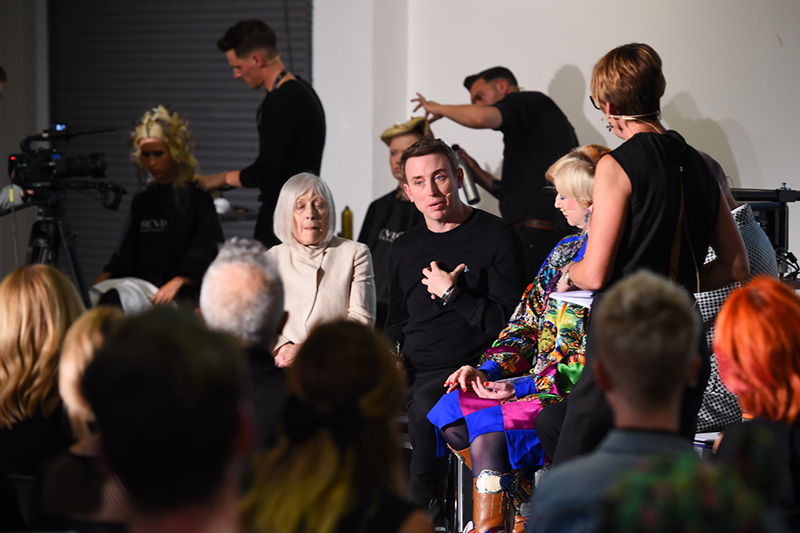 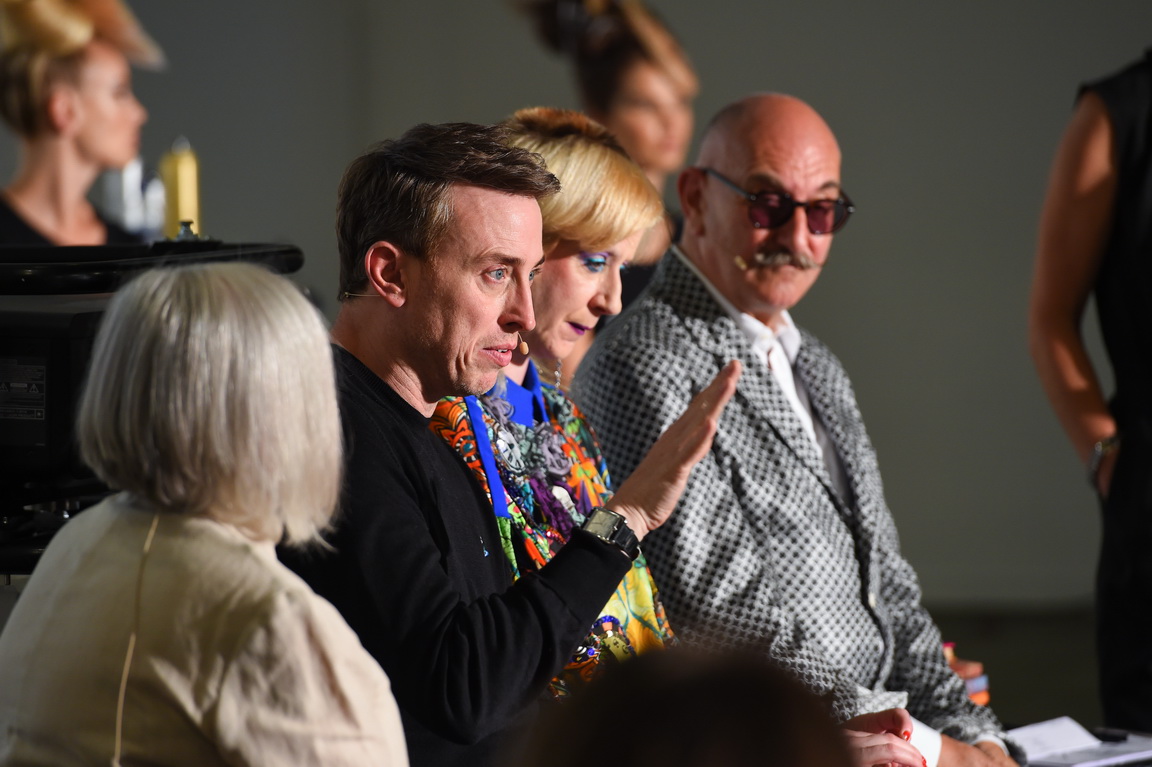 John’s selection also had very personal ties. A close friend of the late groundbreaking architect Zaha Hadid, he chose her imposing, iconic, undulating masterpiece, the Heydar Aliyev Center in Azerbaijan. “It was Vidal (Sassoon) who initially introduced me to Zaha,” he explained. “I asked her what she did, and she told me she was an architect. I had no idea. I said: ‘Oh, I’ve got an extension that needs doing in Clapham…!’

“(After her untimely death last year), I heard her described on Radio 4 as an iconoclast, and it was such a jazzy word. My understanding of it is that it describes someone who smashes what icons did before, which was Zaha through and through. She forced her way into that boys’ club,” he added. “It was this idea of achieving the impossible – she was dynamic. It felt very fitting to choose this building; I can’t draw, I can’t work in 2D but 3D feels quite easy, and this felt right.” The stylist in charge of translating architecture into hair? Vintage specialist and hair sculptor Carl Brown of Russell and Brown’s Vintage Salon. 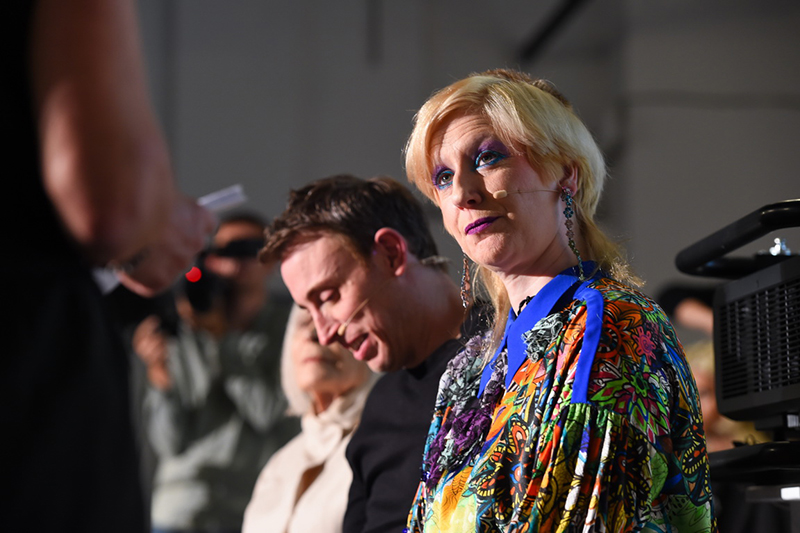 Julie’s choice was a giant, interactive fibreglass sculpture by French-American artist Niki de Saint Phalle. Titled ‘Hon’ (meaning ‘she’ in Swedish), it depicts a reclining woman, daubed in primary colours, which visitors are able to enter by walking between her legs. “I think of this as the greatest whore on the planet,” she told the audience.  “I love it for its sense of scale, sculpture, form and colour.” Colour expert Ceri Cushen of Metropolis stepped up to the plate to face the daunting task of replicating ‘Hon’ using hair. 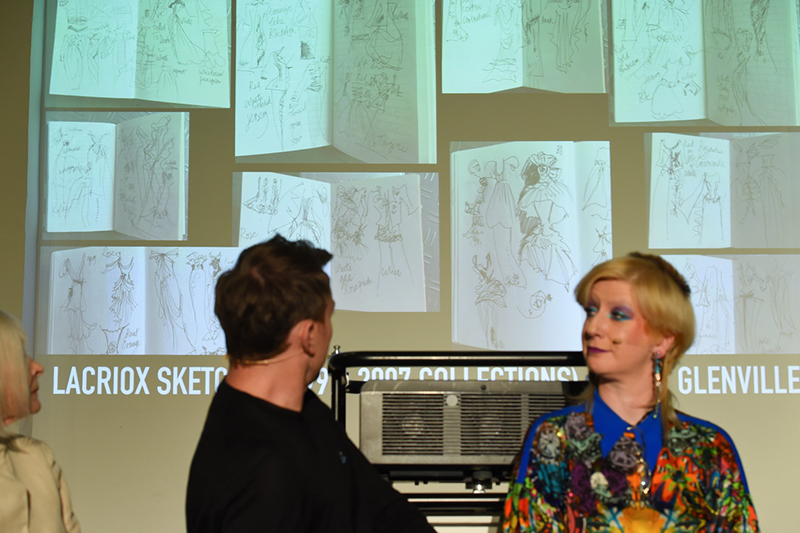 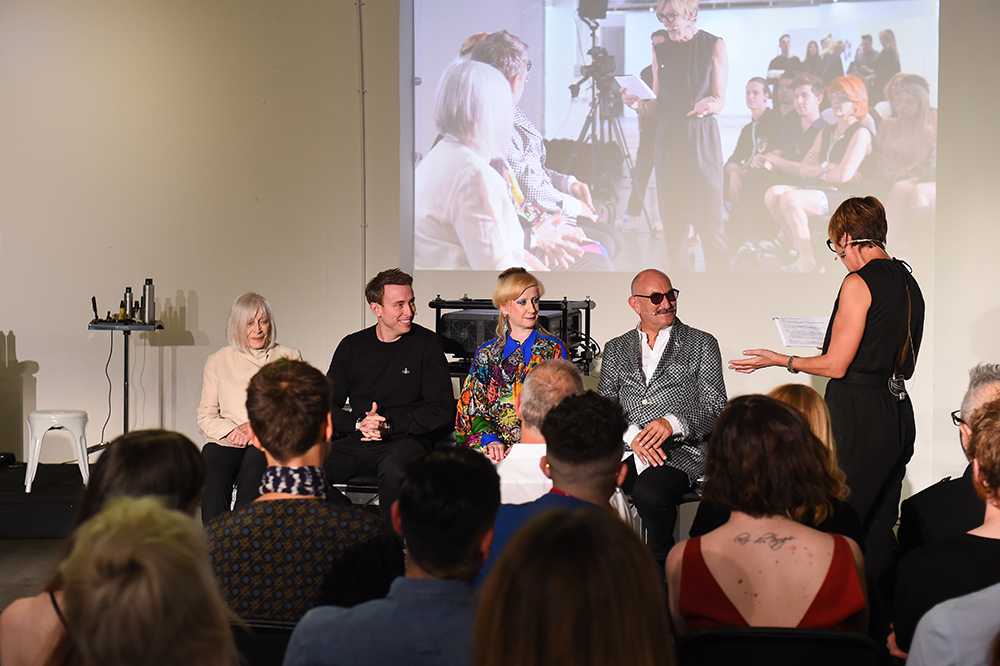 Finally, Tony delved into his own archive for his selection, dusting off sketches he created whilst front row at the decadent shows of Christian Lacroix. “Fashion can be art, and fashion encompasses hair, makeup and couture, like Lacroix,” he said. “I’m interested in crafts that cannot be replicated by machinery – drawings, makeup, making clothes and hair. The element that’s missing is the hand. We are looking at work that is made and comes from the heart – not a mechanical process – and that should be revered.” Sarah Wood of Necia’s Hairstyling was in charge of converting pen strokes into a 3D style inspired by Tony’s deft and dynamic illustrations. 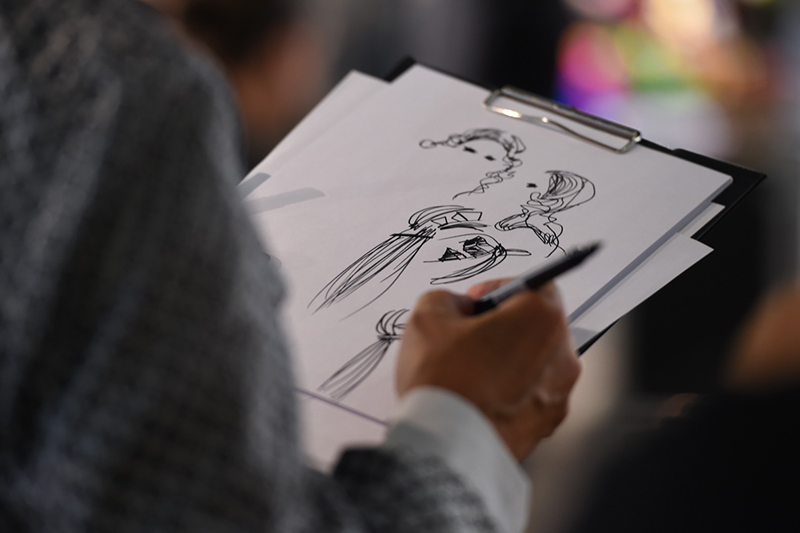 Shapes, textures and colours came together in front of the panellists eyes, with each stylist walking the audience through their process with mood boards and footage from trial runs. Within half an hour, they had all crafted their own breathtaking takes on modern art and creative techniques atop individual models.

“It’s fabulous, lovely, simply beautiful” said Doris as she took in Emmanuel’s finished braided creation. Featuring tapestry-like panels with structural black threads, textured tufts of hair left free and tinted brown and deep violet with Revlon Nutri Color, and hidden tubing that piped smoke from the top of the model’s head, the overall effect was mesmerising and a feat of hair engineering. 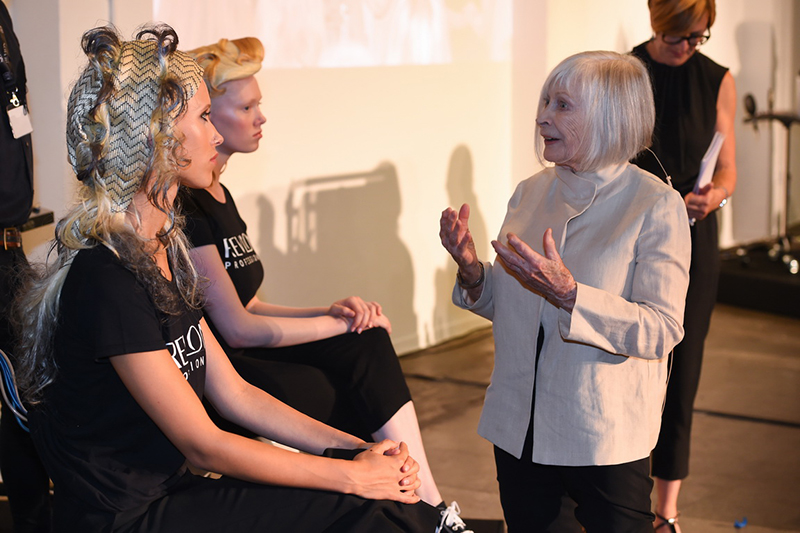 Carl drew on his technical skills to blend vintage setting and bulking techniques with the sweeping lines that formed the basis of Zaha Hadid’s design.  As John took in the finished look, he reflected on how subjective art and hair can be. “I think he’s done an amazing job. You have to stand back and let these hairdressers express themselves,” he explained. “I would have approached this differently, but true artists are very open minded, and I can find that difficult. I think Zaha would be very happy with this shape, with these curves.”

“I tried to blend those signature shapes of hers into a seamless landscape,” Carl said. “Zaha would never want a right angle in her designs, so I kept it all as fluid as possible and very organic.” 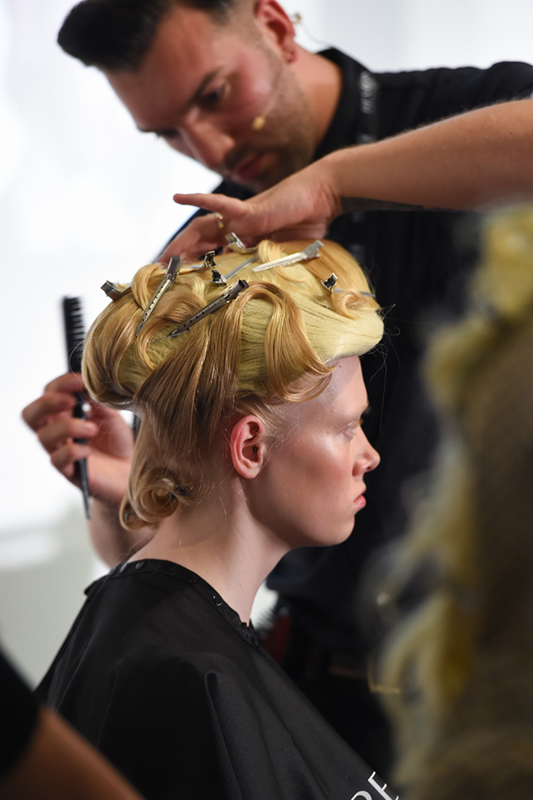 Ceri produced a gravity-defying updo, with “the world’s most fabulous merkin” – an amazing description by Julie Verhoeven – mounted on the front. Crafted from a bundle of wefts, painted with swirling colours reminiscent of the hues that cover Niki de Saint Phalle’s installation, she shaped a feminine crescent using clippers and pinned it to the front of a classic chignon.

“It’s an amazing creation with a gorgeous interpretation of the colour in the piece,” said Julie as she admired the handiwork. “You’ve taken something that was quite crude and primitive in a way and you’ve made it so exquisite.”

“When I first saw the piece I was ever so slightly horrified, if I’m honest,” Ceri admitted. “I wanted to do something elegant and feminine rather than in any way vulgar or grotesque, but still retaining the spirit of the artwork.” 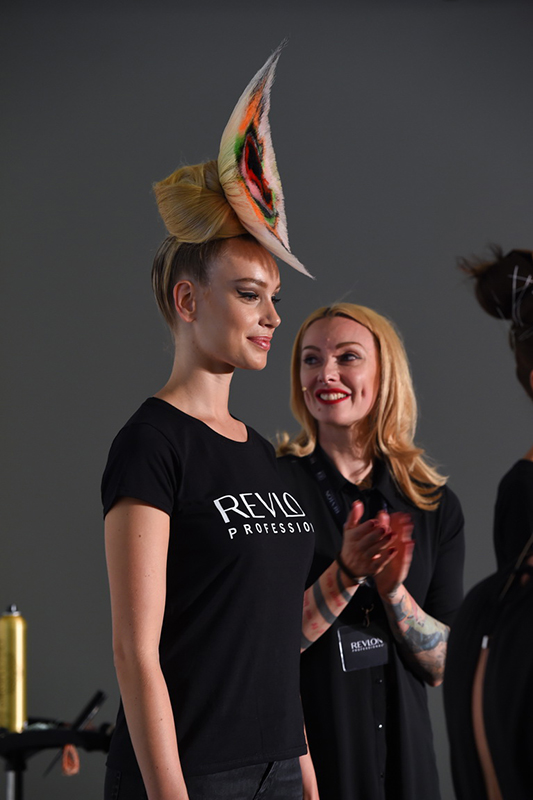 Finally Sarah drew gasps of wonder from the audience with her delicate interpretation of Tony’s Lacroix show sketches. Draped panels of smooth hair were contrasted with angular inserts, including an embroidery ring and crisp white lines of thread, which Sarah stitched by hand over the course of the evening.

“I was excited, and taken aback by the elegance and abstract nature of the drawings,” she explained. “I wanted to create lines and curves, with the unfinished element of a sketch but keeping it sophisticated It’s all about the lines.”

Tony was completely taken with the finished style. “It’s modern but respects heritage with an unexpected beauty,” he said. “The two sides are in harmony and I have to say, I would like to send a picture to Monsieur Lacroix himself to see what he says as it perfectly updates a lot of the hair that he did.” 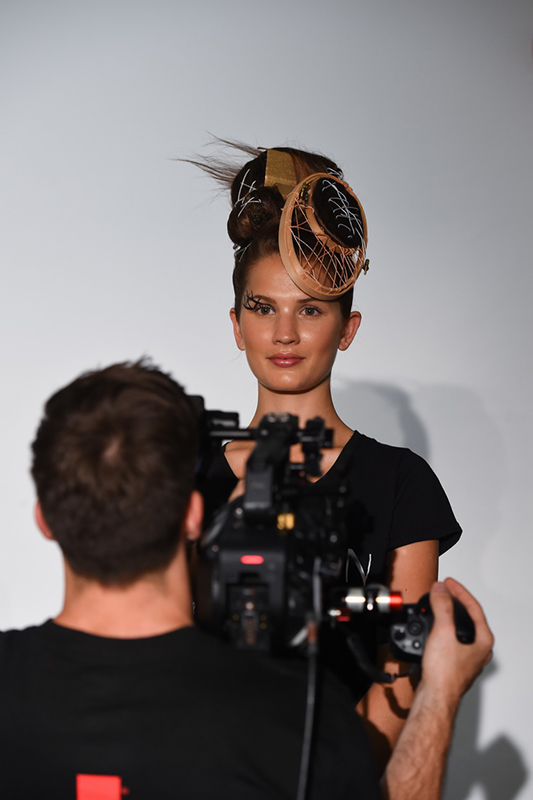 An immersive experience and truly a night to remember, the evening concluded with every guest taking home a packed goody bag from Revlon Professionals and American Crew, featuring a quartet of styling products selected by John Vial. 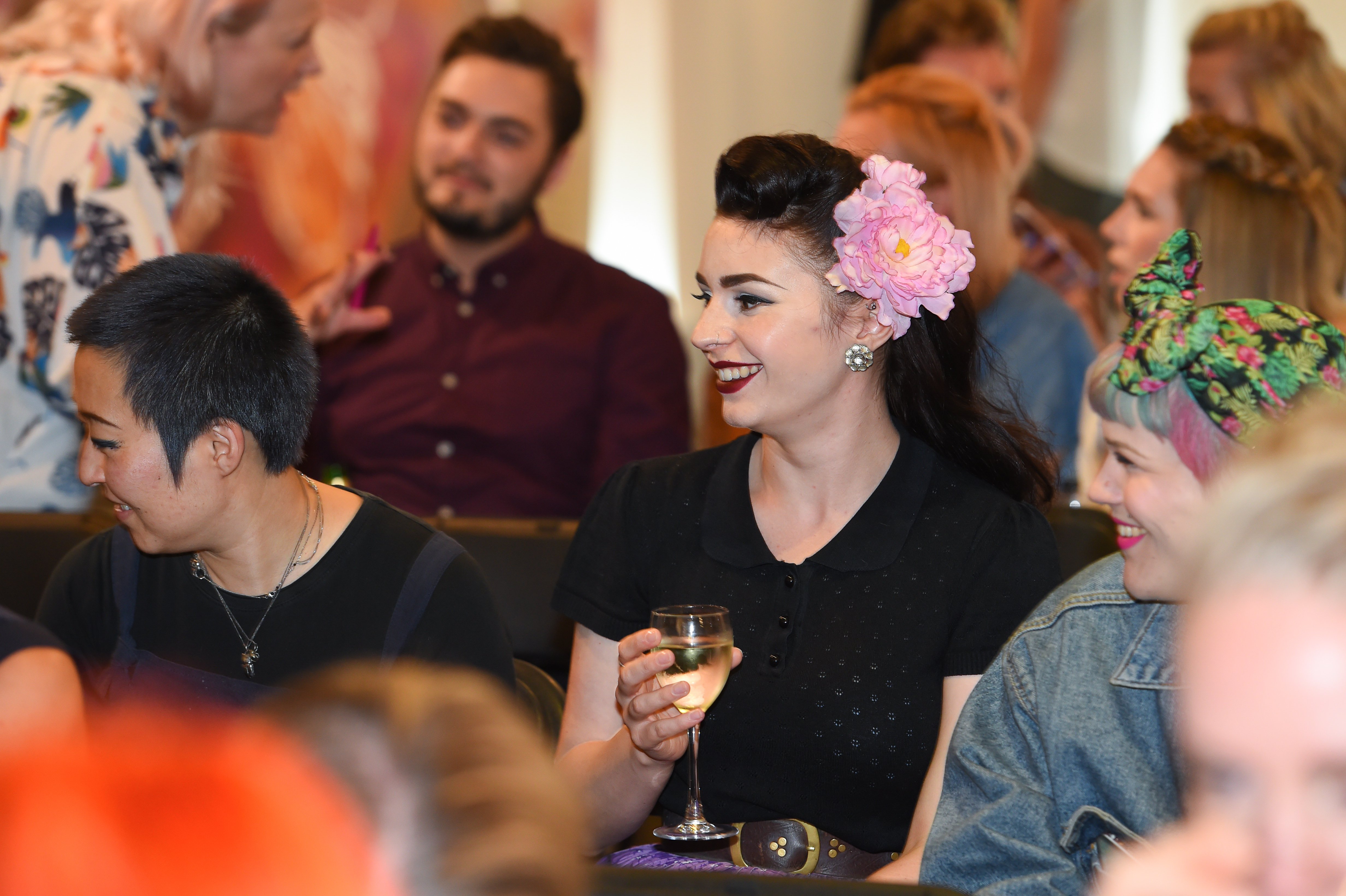 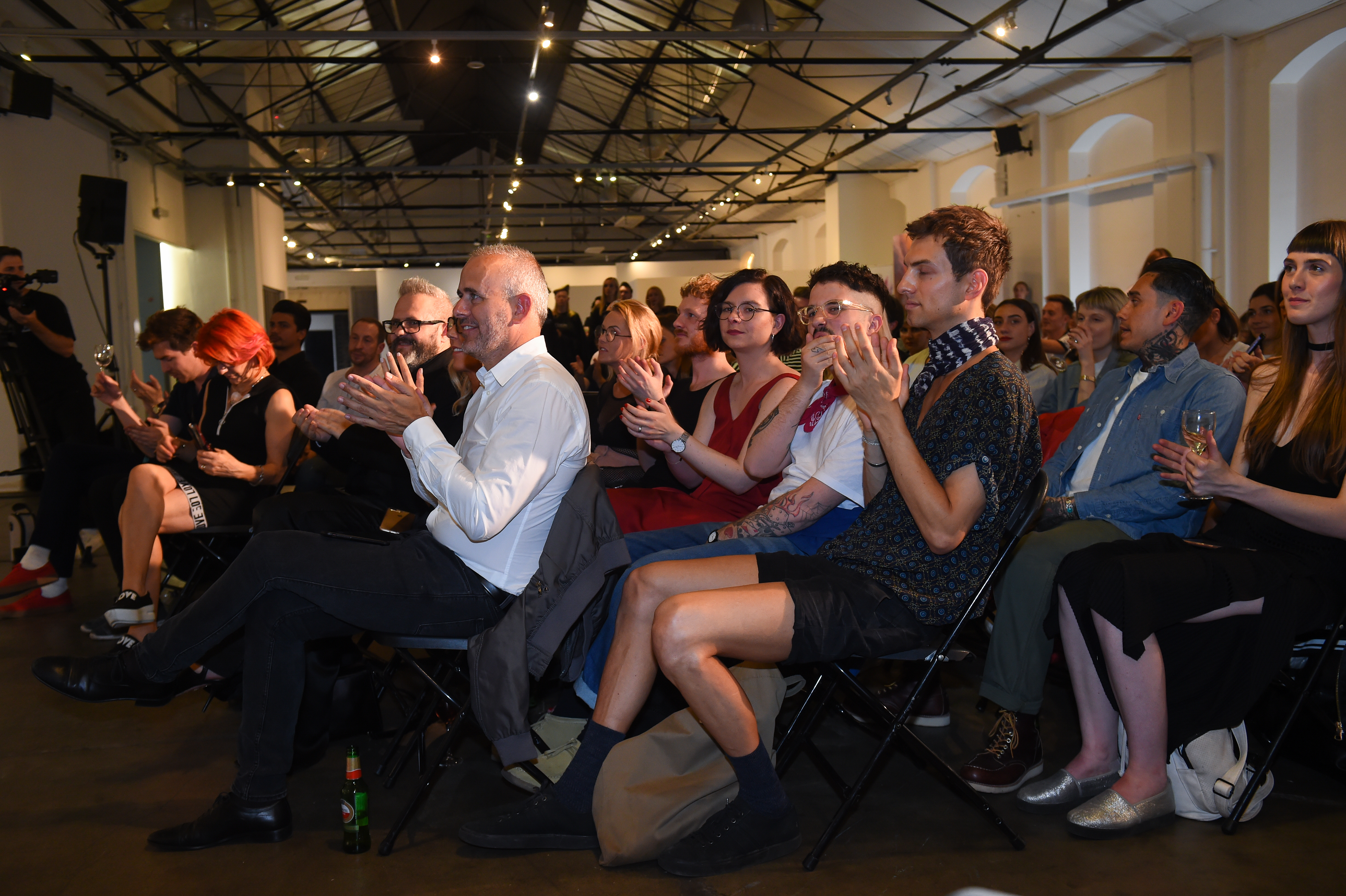 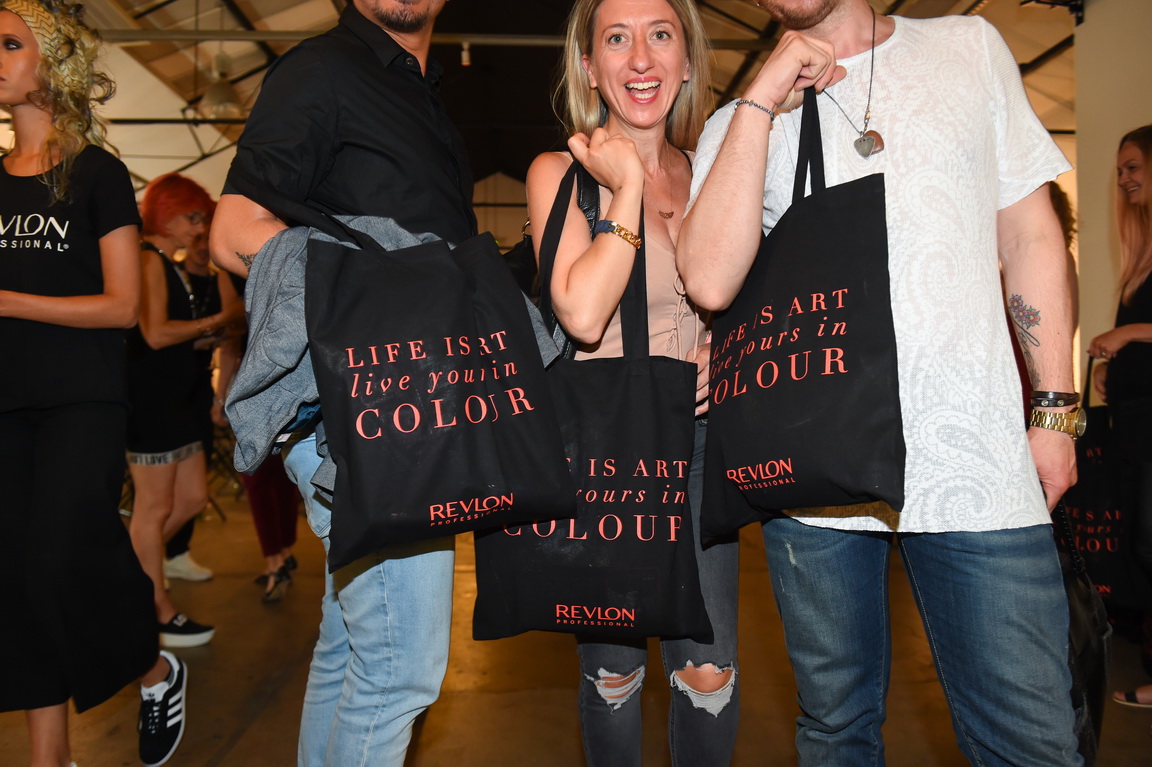