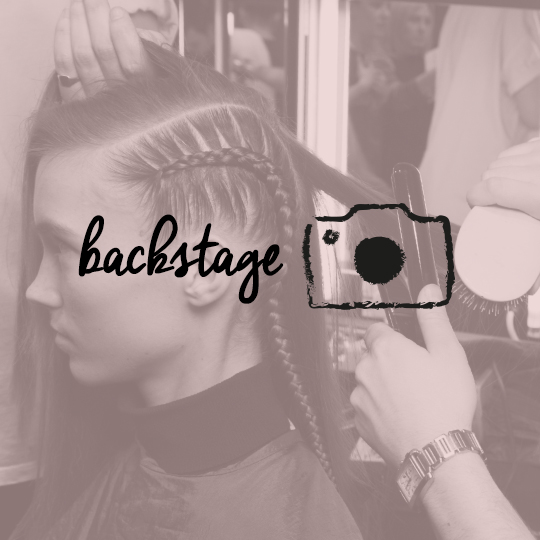 From intellectual beauty to an homage to 90s Versace, here are the standout shows that made our hearts skip a beat 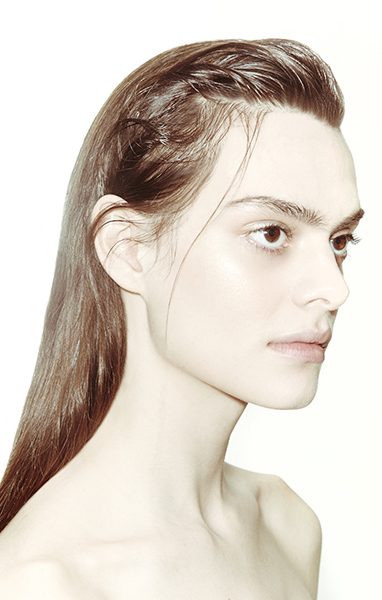 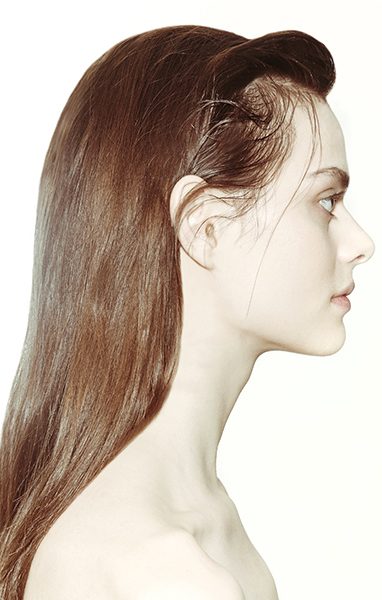 Clean hair is Guido’s preferred base texture for so much of his styling and at the Kane show, it was no different. Allowing clean hair to air dry, he used a curling iron on the length once dry to soften the finish. The point of interest was the simple flip over to one side, immediately delivering an edgier, more masculine look. “My intention is not for the hair to look perfect,” said Guido. “I want it to have personality.” 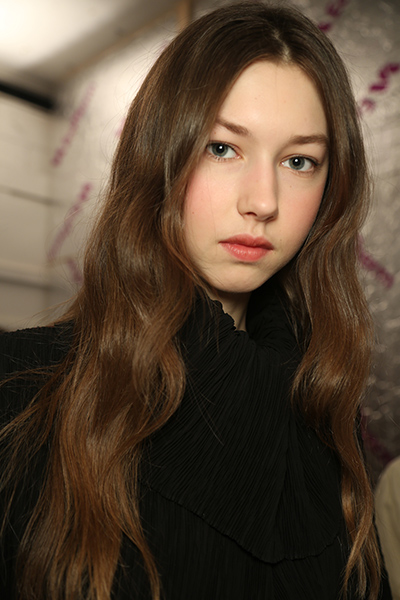 For a collection full of sophisticated notes with deep autumnal colours, James Pecis envisaged a gallery girl with understated, youthful beauty. So we saw easygoing S waves courtesy of the ghd Curve Soft Curl Tong, pressed against the hair rather than fully wrapped and clamped, with crooked, mussed up partings keeping it all fresh. Want to see more.

Inspired by a collection that evoked military dress from the designer’s native Georgia, Syd Hayes created a modern warrior style that was equal parts feminine and restrained.

“We dried the hair straight, using the BaByliss PRO Italia Brava dryer, and then created a deep side parting. Hair on one side was gelled and then the rest of the hair was tucked behind the ear, creating the illusion of an undercut. On the left-hand side of the head we created a tight scalp braid. To keep the braid poker-straight on the runway, wire was inserted upwards through the length at the back,” said Syd. “The rest of the hair was then straightened using the BaByliss PRO Titanium Expression Ultimate Styler for a mirror-like finish.” 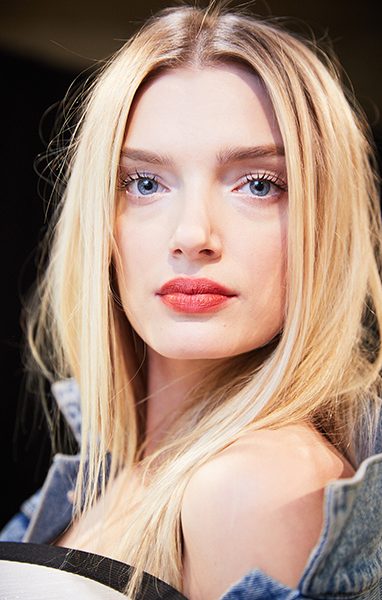 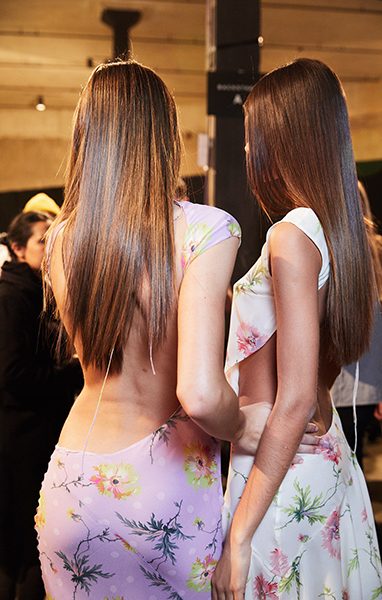 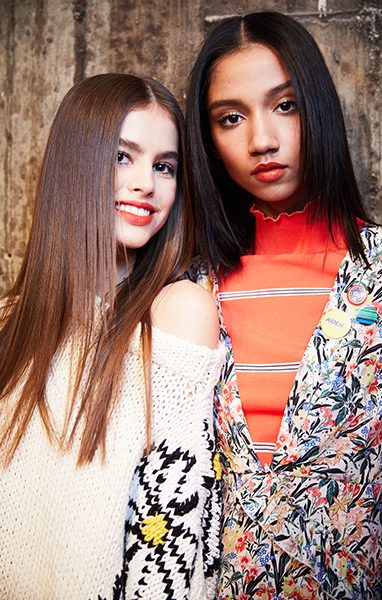 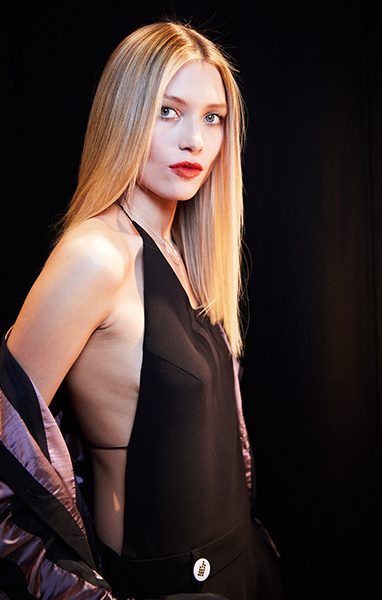 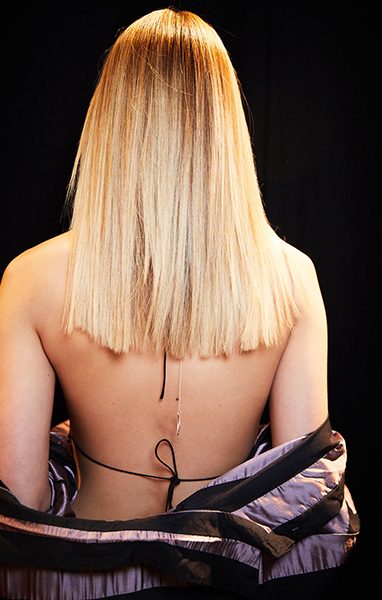 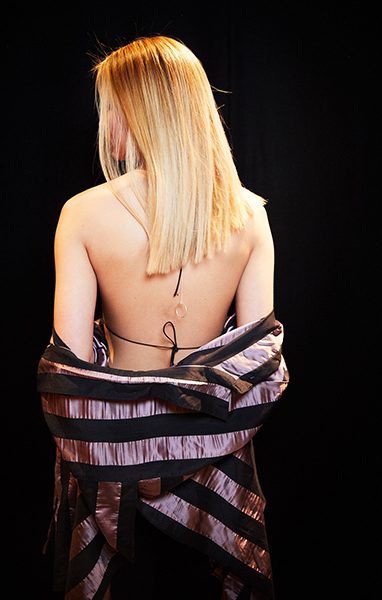 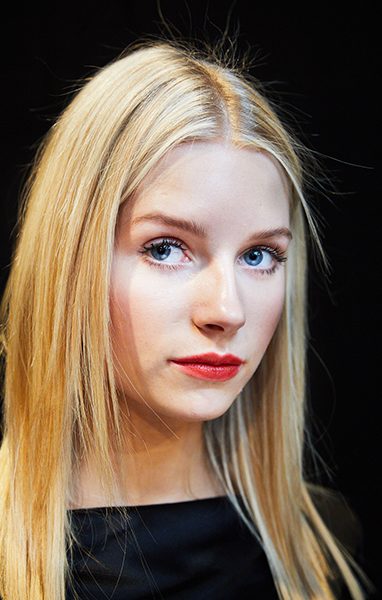 Youthful, 90s, Versace-campaign hair was the inspiration for Duffy at Topshop Unique, where the hero product was the only one in rotation: L’Oréal Professionnel Techni.ART Pli.

Damp hair was spritzed with the styling spray, before it was blow-dried straight. Duffy and the team added pre-straightened, colour-matched extensions to each girl’s hair to ensure the ends were crisp, clean and all one length, and then flat-ironed the entire style with multiple passes over each section. The result was a sleek texture with a glass-like finish, which ‘shattered’ when the hair moved and the girls walked the runway.

“Mark described the collection as a young girl who has lots of facets to her personality… so we tried to combine them in with the hair,” Maria explained. “With this reference we created a controlled gentleman’s parting, slicking the hair back for a really flat and clean look.” In contrast, the front of the hair was then crafted to be more carefree and retro, with an undulating 80s-style fringe.

It was a combination of curl and wave patterns that captured the imagination at Roberta Einer, championing texture and natural movement. “To pull this look off it’s important to create a strong foundation and structure to hold the shape,” said Bea, who used varying sized tongs to get that realistic and natural wave pattern. 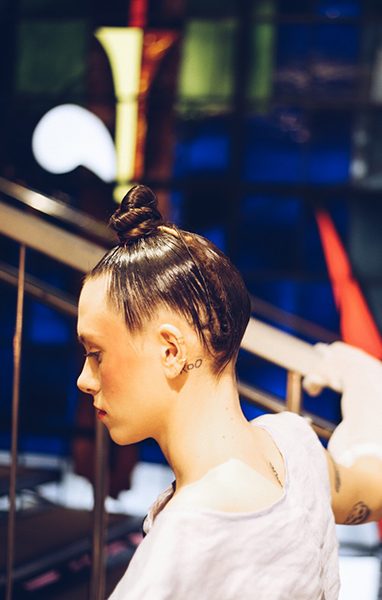 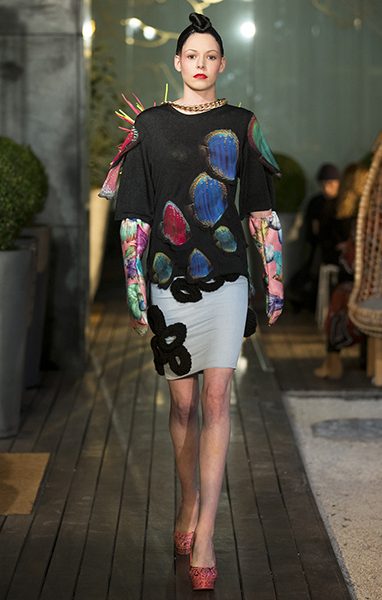 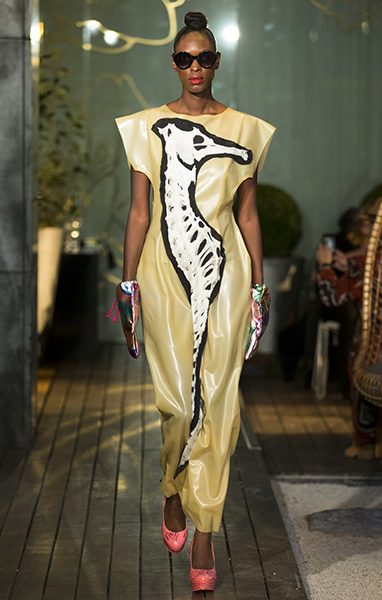 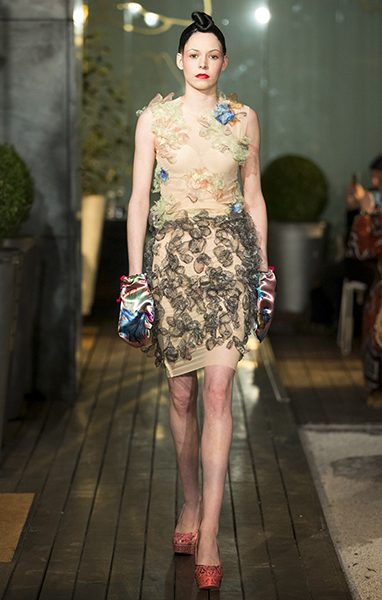 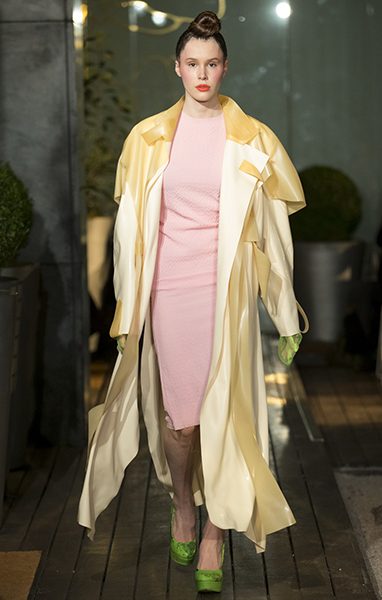 Beauty and fashion maven, Michelle Violy Harper, teamed up with Vin + Omi for the brand’s A/W17 collection and she became the inspiration behind the hair look.

Hair was prepped with ColorProof PureRelease Instant Detangle to remove knots, before hair was blow-dried. Once dry, hair was parted from the top of the ears to the crown. ColorProof ControlCraze Styling Crème was applied before forming the first ponytail high on the head. The back section of loose hair then joined the high ponytail and secured with another hair tie. Hair was smoothed down using ColorProof UltraMarathon Strong Hold Colour Protect Hairspray, before the hair was twisted to form a smooth knot and secured with hair pins. ColorProof PowerSculpt Hard Hold Gel was then applied to give a sleek, polished finish. 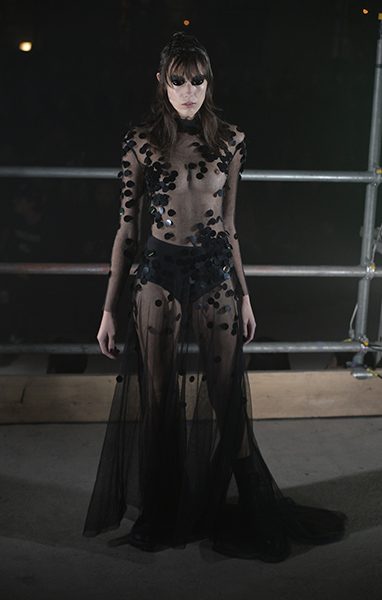 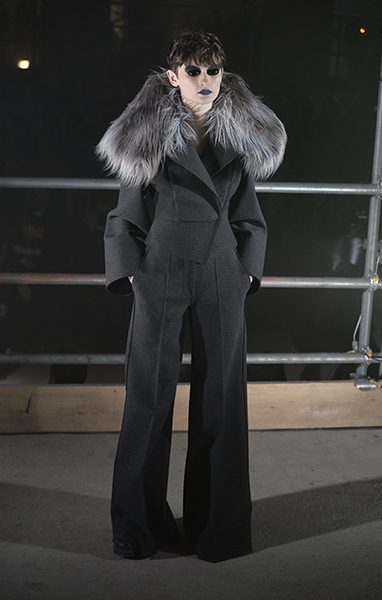 Gareth Pugh’s macabre vision reigned supreme for his homecoming to London after showing his collections in Paris. Ferocious characters with buglike eyes stalked the runway, with deconstructed hair that stuck to their heads and necks.

Hair was saturated with hairspray and gauze netting was placed over to add shape.  The product was dried in to create a hardened texture, leaving the lengths looking matted and worn-in.

“This was a reaction against overstyled hair and glamour,” said John Vial. “Gareth Pugh’s women are fierce and strong.” 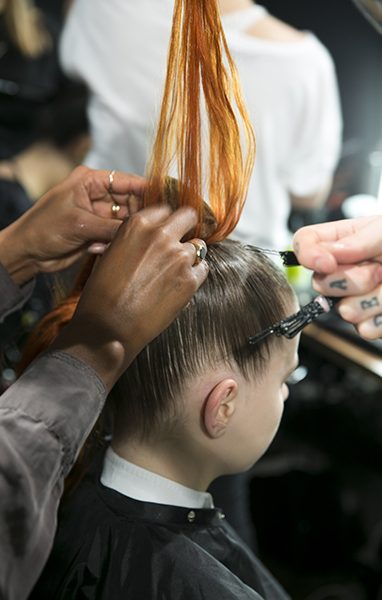 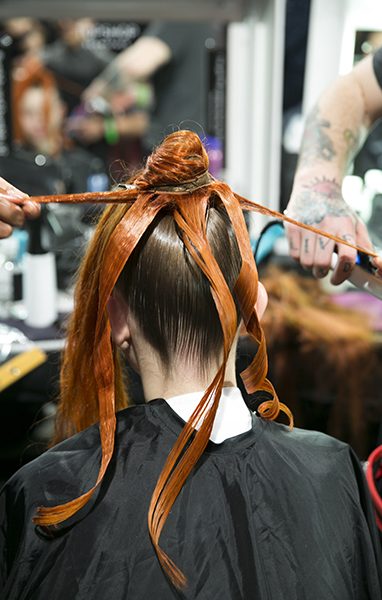 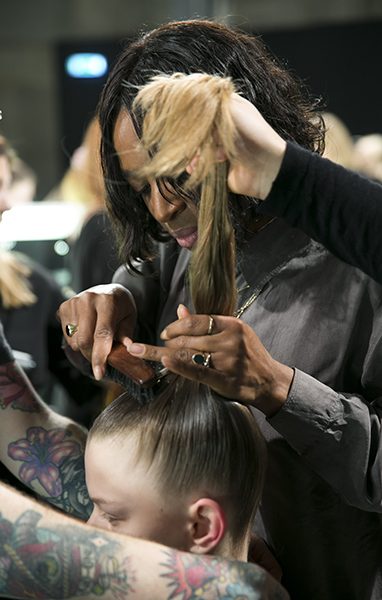 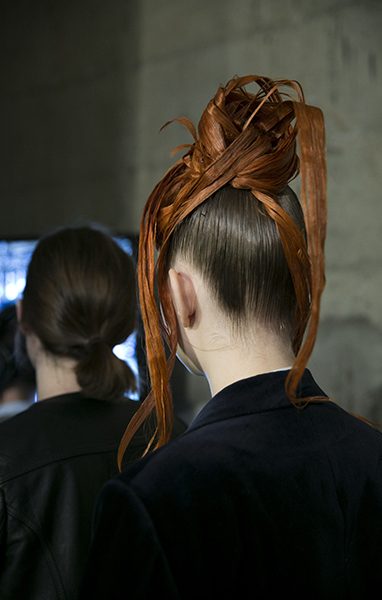 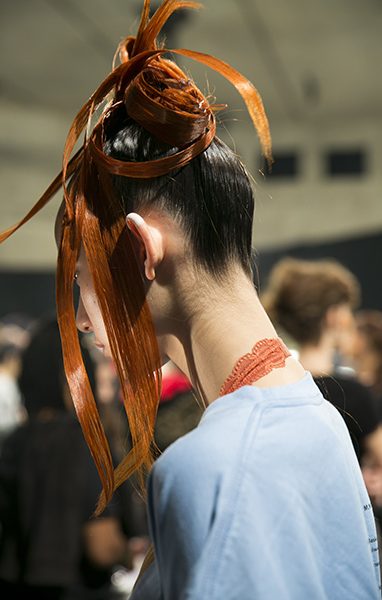 Traditional origami collided with a modern rudegirl vibe, for a highly ornamental style that was almost birdlike.

The base for this look wasa very slick ponytail, smoothed over with Bumble and Bumble’s Fix It Gel and Holding Mousse. Then copper coloured wefts, dyed to compliment the clothes in the collection, were sprayed with Firm Hold Hairspray and ironed to stiffen them. Cyndia then attached the wefts to the ponytails and bent them to create the sculptural look. 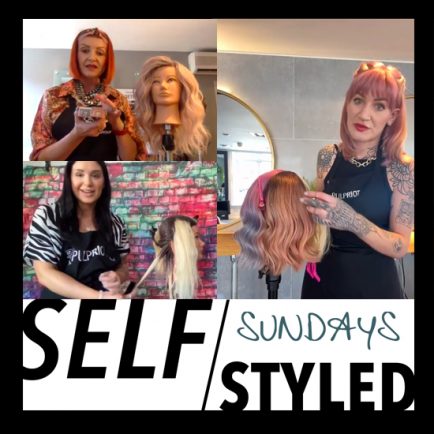 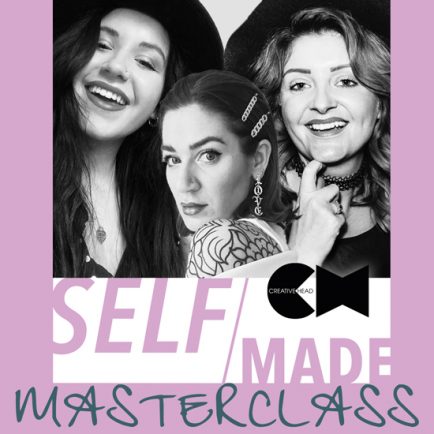 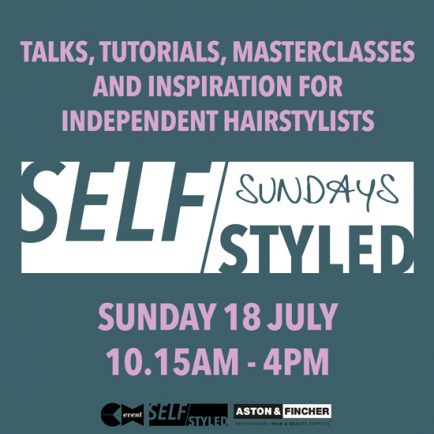 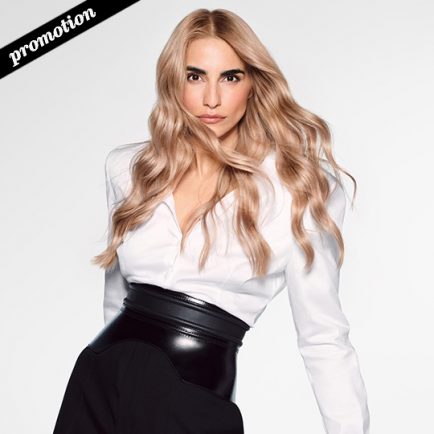 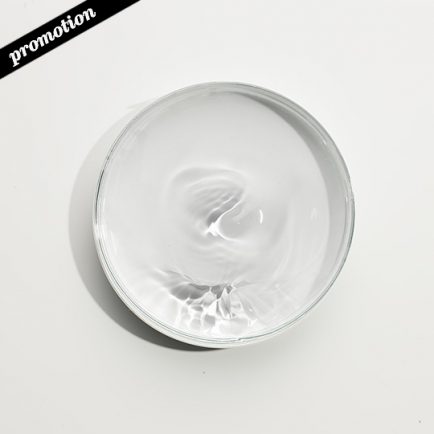