Following all the Pretty Woman references seen on the runways in New York, the curls also hit the catwalks in London, with Aveda global director, Bea Watson, creating ‘80s-inspired everyday stylised glamour at Roberta Einer. She worked with models’ natural movement and curl patterns, grabbing Be Curly Style Prep to enhance texture, and Air Control to create a lightweight-but-strong hold on natural movement.

More was more at Sadie Williams, where Syd Hayes created the biggest ponytails you ever did see. Most Wanted Session Stylist Syd Hayes bulked out models’ hair with extensions, which were saturated with a volumising hairspray and dried off with the BaByliss PRO Italia BRAVA dryer. Hair was then brushed back into a ponytail, sprayed with hairspray and crimped using the BaByliss PRO Ceramic Crimping Iron. Syd then back-brushed the ponytail to increase its volume, and topped off the look with a SadiexSyd Hair Cuff.

We got a practical yet pretty vibe at Simone Rocha, with James Pecis for KMS mirroring the tied-up tailoring with three knotted braids united by a silk bow. Hair was prepped with ADDVOLUME Root & Body Lift and rough dried, before the front section was blow-dried down across the face and spritzed with HAIRSTAY Workable Hairspray. HAIRPLAY Playable Texture was spritzed through mid-lengths and ends before roughly-dividing into three and knotting each section, starting at the crown and working to the nape of the neck. All three sections were then gathered at the bottom and finished with a black silk ribbon. Why knots over traditional braids? To give this feminine style an unexpected tomboy twist. We approve.

In a show called Sisters of the Moon, references included cults, tribes, witches and early ‘80s punks. One of the looks from Johnnie Biles was the Chelsea Cut, and the hair products to hand also revealed a celebration of the decade, with lashings of gel, mousse and hairspray from Fudge Professional.

The ‘80s theme continued at Lulu Guinness where Zoë Irwin for ghd channelled Desperately Seeking Susan to create a bouncy, curly updo. Hair was prepped with ghd root lift and curl hold spray, and blow-dried using the ghd air hairdryer and diffuser. Defined curls were created by twisting and wrapping hair around the ghd curve creative curl wand, rather than flat wrapping, creating a spiral effect. To complete the look, hair was twisted up at the nape of the neck and tipped over onto the crown of the head. For models with afro hair, natural texture and movement was exaggerated by adding ghd root lift and diffusing the hair. Hair was then twist wrapped around the end of a metal pin tail comb and gently heated by clamping the ghd gold on top to form unison with the rest of the curls.

This clean and polished mid-set ponytail, with a sharp, deep parting and vinyl-like high shine was created by Maria Kovacs for TIGI. Catwalk by TIGI Strong Hold Mousse was initially applied to the roots of the hair, before Bed Head by TIGI Queen For A Day was added to mid-lengths and ends. A deep side parting (a ‘tuxedo parting’ according to TIGI) was then placed on the right side of the head, before putting the hair up into a ponytail. Hair was finished with Catwalk by TIGI Your Highness Hairspray for a clean, shiny edge.

Anthony Turner always likes to tell a story with his hair looks, and the Erdem show was no exception; this time it was an aristocratic girl in the ‘20s who has to change a flat tyre. Hair was set into finger waves using Tecni.ART Pli and new Wild Stylers, by L’Oréal Professionnel. Bobby pins were randomly scattered through the hair, and the waves were squashed down as if models had been rained on, before the rest of the hair was tied into a low ponytail with L’Oréal Professionnel Infinium Hairspray and Mythic Oil. Some girls were given veils that looked as if they had been blown backwards by the wind.

“It’s Neneh Cherry meets Missy Elliot,” said designer Omi of the hair references for the duo’s A/W18 show, which the hair teams translated into high bunches with a roughed-up, toughened up texture. My. Hair Care lead stylist Denis Kovalyov added to the stomping ‘90s flavour with the injection of chunky coloured wefts across five of the models, using hairpieces tinted using contrasting shades of the brand’s Infuse My. Colour Shampoo. Each of these was affixed with tapes and then razor cut to give a shattered effect, blending seamlessly with the girls’ (and guys) own lengths. “It’s all about keeping it individual and wearable,” Denis added, discussing the DIY feel to the styling, “and that fits with the defiant theme and title of the show – ‘We Are Not Sheep’.”

In contrast to a collection that was literally emblazoned with ‘sex’, Guido Palau’s hair vision at Christopher Kane exuded a softer and more subdued sensuality. Models all had their hair washed with the Redken All Soft shampoo and conditioner to encourage lightweight, natural texture to emerge. The team applied No Blow Dry Air Dry Stylers in formulas that matched each girl’s hair type, before gently drying lengths with the new Dyson Supersonic Professional dryer – currently in prototype form and being given its first outing at the season’s shows – fitted with either a diffuser (for curly and wavy hair) or narrow nozzle (for straight hair). “Each model was selected to walk because of their individual appearance,” Guido explained, “so we just want to bring out the beauty and sexiness of that.” Free, simple, clean and flowing, the hair capes were accompanied by the slightest flush of blush on the girl’s cheeks, hinting at the saucy inspiration behind the clothes; illustrations from the original The Joy of Sex.

Inspired by the mullet revival in fashion circles (boosted by his own work with artist Julie Verhoeven), John Vial created a look he described as “ying and yang” for the models at Richard Malone. Contrasting textures that drew on the head-hugging styles of boys in the 1920s were created by blow-drying hair straight, before applying Revlon Professional Double or Nothing Brightastic to the roots and crown with a colouring brush – causing the hair to sit tight to the head with a defined shine line under the runway lights. The ends of the hair were spritzed with Style Masters Hairspray Modular to add matte and natural looking control, before a kink was created at the nape of each model’s neck using a net band and diffused dryer heat.

In their floral scuba-inspired gear, the Preen girls were made to look like they were underwater, with hair that seemed to float down the catwalk. Eugene Souleiman created imperfect waves on some models using the ghd Gold Styler and the ghd Curve Classic Hair Tong. To add texture he used Wella EIMI Dry me, and EIMI Mistify Me Light to hold the strands of hair in place – then, to finish, a touch of gold glitter was scattered over the temples. Some models had their hair tucked into their hoods, while others were left to flow freely.

With a nod to ‘70s skater culture and the hazy, saturated imagery of photographer Hugh Holland, Xiao Li was all about tough femininity with sportswear elements, while channelling a little retro Americana too. Mark Francome Painter at CLM Hair & Makeup for evo delivered a textured, lived-in look that a surf-loving skater girl from LA’s Venice Beach would rock, sending models down the catwalk with deconstructed, messy topknots thanks to evo’s shape vixen volumising lotion and salty dog salt spray. A smattering of easy tiger smoothing balm and crop strutters construction cream made it totally rad, dude. 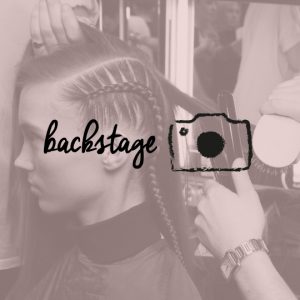 From intellectual beauty to an homage to 90s Versace 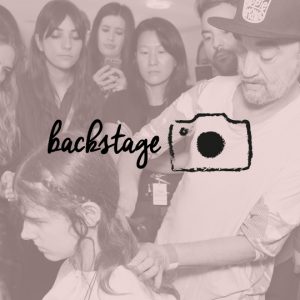 The latest trends straight from the runway… 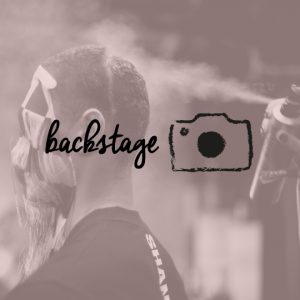 The best looks from LFWM AW17 + how to create them