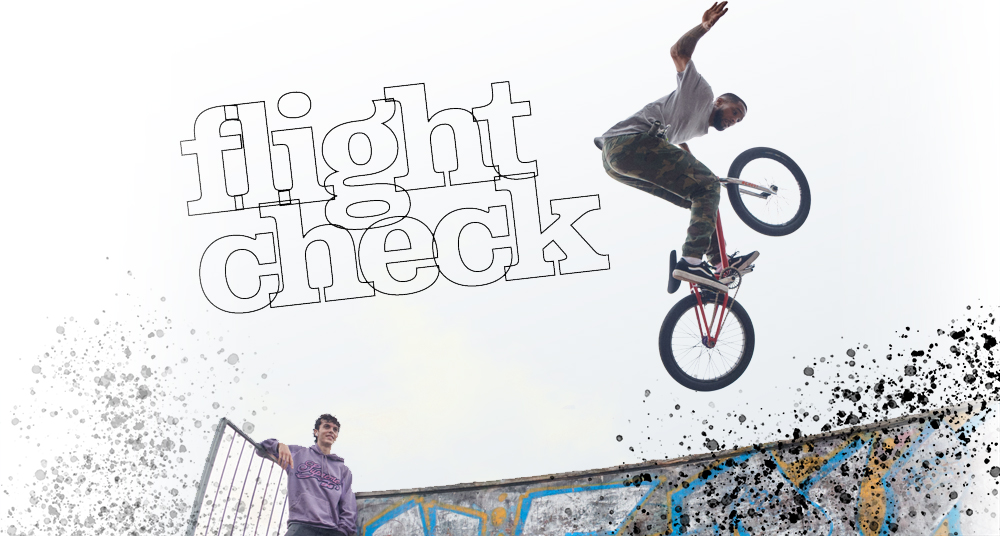 Aged 20, Exaucè Imbo – just call him Ex – is already founder and owner of EXSTUDIO in Glasgow’s Milnpark Street. Visiting family when called to the shoot, Ex had no kit with him. But someone passed him a cordless BaByliss PRO Super Motor Clipper and he started to fly…

“Ex is a brand that I would like to grow. We’ve had Jermain Defoe, Odsonne Édouard, and Wes Nelson come in, which is good for helping the business. I want to expand, expand, expand! I asked my mentor, Jody Taylor, what he thinks and what we should do, and he said: ‘Be free. Just do what you want to do.’ I felt free to put my own input into the styles.”Ex 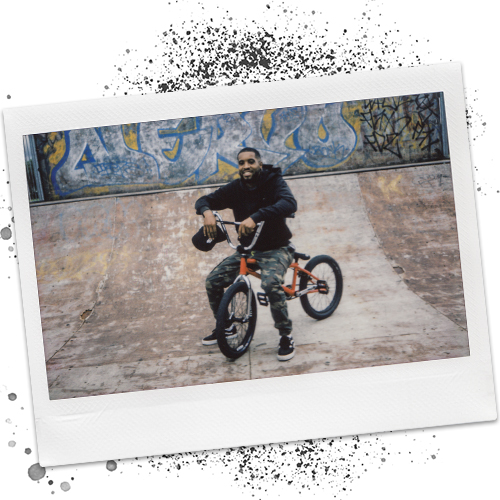 “I don’t listen to music when I ride as I like to keep a clear head. I ride to enjoy it, but I edit my trick vids to tunes by Tyler The Creator, Lil Baby and Drake.”Ash, BMX

To create Ash’s look, Ex started by creating a zero guide line with the BaByliss PRO Super Motor Skeleton Trimer.
“I used the trimmer to outline and to remove any remaining hair to leave the first guideline nice, clean and bald,” he explains. “As I was creating the first guideline, I decided to keep it low and towards the back of the head onto the occipital bone. I decided to create a harsh line designing into a V shape.

After creating the first guideline, Ex used the BaByliss PRO Clippers to create the second guideline. This was the start of the graduation of the fade. “I opened the clippers fully with the lever, which is the equivalent to 0.4/ 0.5 and set my second guideline just one centimetre or so above the zero. Then closing the BaByliss PRO Clipper fully to the equivalent to 0.1/0.2 to take away the first initial zero guideline. 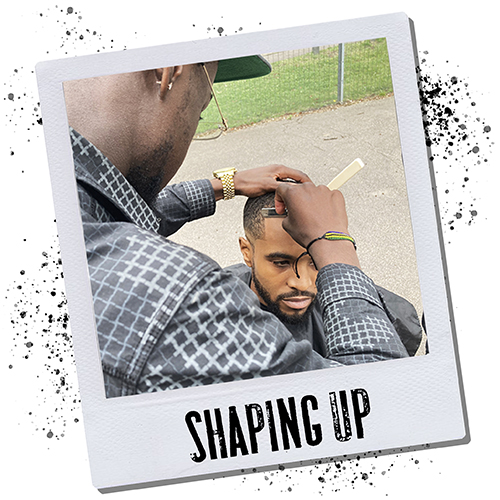 “At this point we took the 1.5 guard and applied it on the BaByliss PRO Clipper, and I started cutting following the grain on the top of Ash’s hair to remove any bulk and to show the waves effect he had.” Ex then did the same on the sides of the head, following the grain but with a lower guard number, such as one, on the parietal area of the head for extra smoothness with Afro hair.  Next, going against the grain with the 0.5 guard closed, Ex focused on the remaining bulk lines to finish off the gradual fade on the side of the head. He then outlined the hairline, sharpening up any excess hairs, and doing the same with the beard to leave the haircut “crisp and clean.” For styling, Ex spritzed a small amount of water and blow-dried it forward with a hard bristle wave brush to enhance the wave effect.

“I started skating properly when I was about ten. Of course there’s ups and downs with everything you do but when it pays off, that’s the feeling that everyone skates for. It’s such a gratifying feeling, it’s hard to explain unless you know. I listen to a lot of nineties, old-school rap when I skate – Like Tu Pac, Biggie Smalls.. loads.” Rocco, skateboard 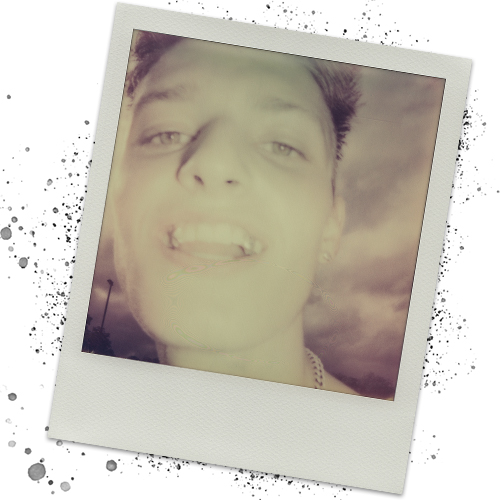 “The hair we’re working with today is pushing our creativity. It’s not like working in a shop… I’ve explained to Ex today, as much as we know about technique, sometimes you have to forget about that and instead work very visually. Reliable, precision tools are key to that, which is why working with the BaByliss Pro Super Motor Clipper is so great. We were able to create something that as a broken down cut looks really wrong, but on the model and as it came together bit by bit, it looks really right.” Jody Taylor, session stylist, #SydSquad leftside-creative.com, men's ambassador for BaByliss Europe

For Rocco’s hair cut, Ex and Jody decided to do one half of the head each. Jody did the first side of the head freestyling as he went on. He started with the Super Motor Clippers, with the lever fully opened – going into the side of the head creating a Mohawk shape. On the parietal area of the head, Jody decided to leave a heavy wedge to add that natural gritty look. Jody also left excess sideburn hairs to add a little unique style to it.

On Ex’s side, he decided to imitate Jody slightly with the Mohawk style, so the hair can be left even on both sides. “I then added a curved, harsh line throughout the top side of Rocco’s head using the Super Motor Skeleton Trimer to add a disconnection point from the top to the side the of his head.” 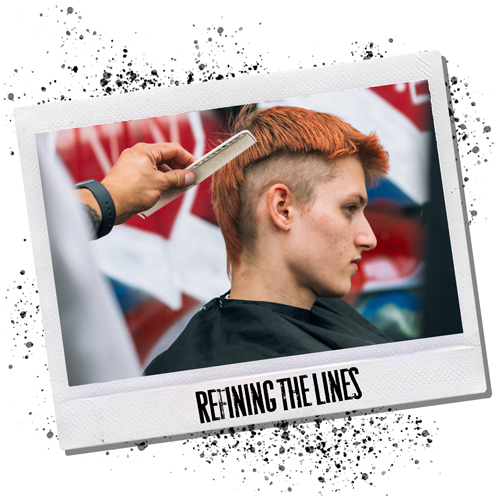 Next, Jody chopped into the tips of the hair with scissors to add the extra texture needed to enhance the natural look they were aiming for. “We added pomade all over the hair from the roots to the ends to add a little natural shine, touch and firmness to the hair,” says Ex. “We didn’t want to put too much effort into styling as that can take away the natural quality we were aiming for. So, we just slightly touched Rocco’s hair with the tips of our fingers, directing the hairs the way it naturally falls with moderate hold and texture.” 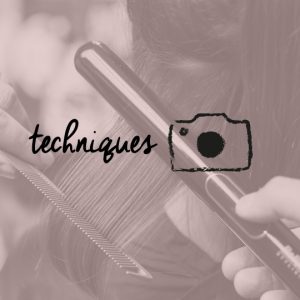 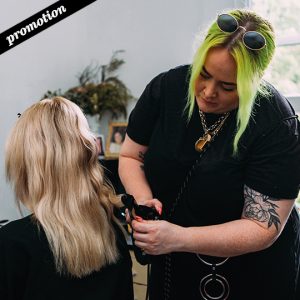 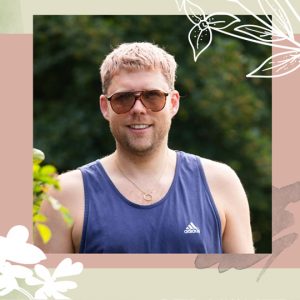 From favourite farm animals to dream holiday destinations, we shoot the breeze with Sam Burnett