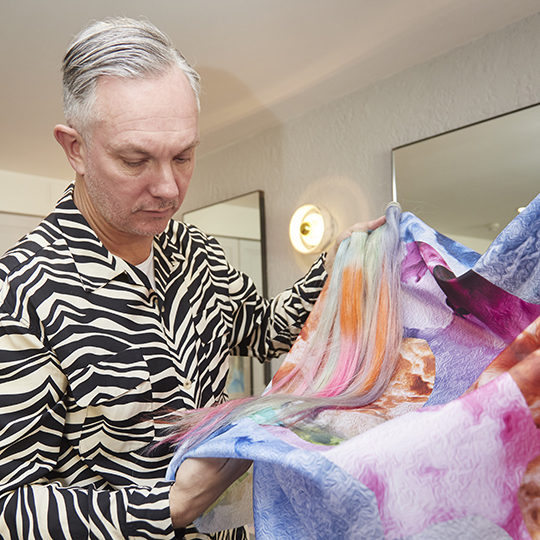 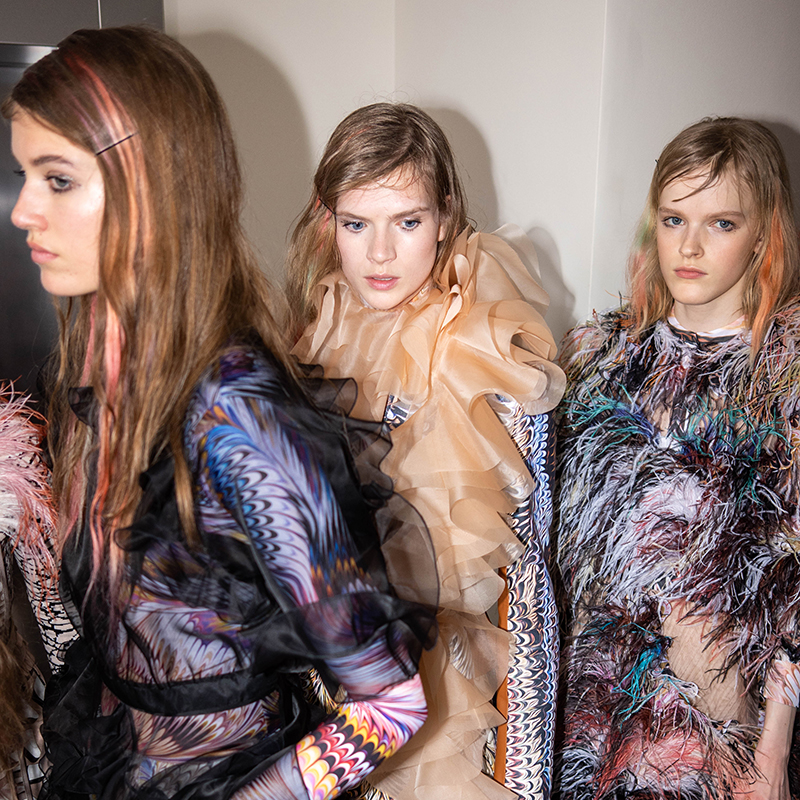 Ahead of Mary Katrantzou’s A/W19 show, Josh Wood was tasked with creating a hair colour look that would complement the designer’s multi-coloured and multi-textural ‘elements’ themed collection. Creative HEAD was given an exclusive insight into the process, which bore two beautiful new colour techniques…

“Mary wanted to work with me to create a pattern – which she is obviously famous for – but with colour,” Josh Wood explained, as we joined him backstage at the show space. “She gave me three different samples of fabric from the collection to try to create a kind of print on hair.

“It actually turned into the two core looks that we created. The first one we called ‘Colour Clouds’ and it’s basically like puffs of colour that we painted on the wefts. The coloured areas have got an intense centre and then they fade out towards the edge. We tried to do it with sponges, and that didn’t really work, so we ended up applying the colour with sponge rollers.” 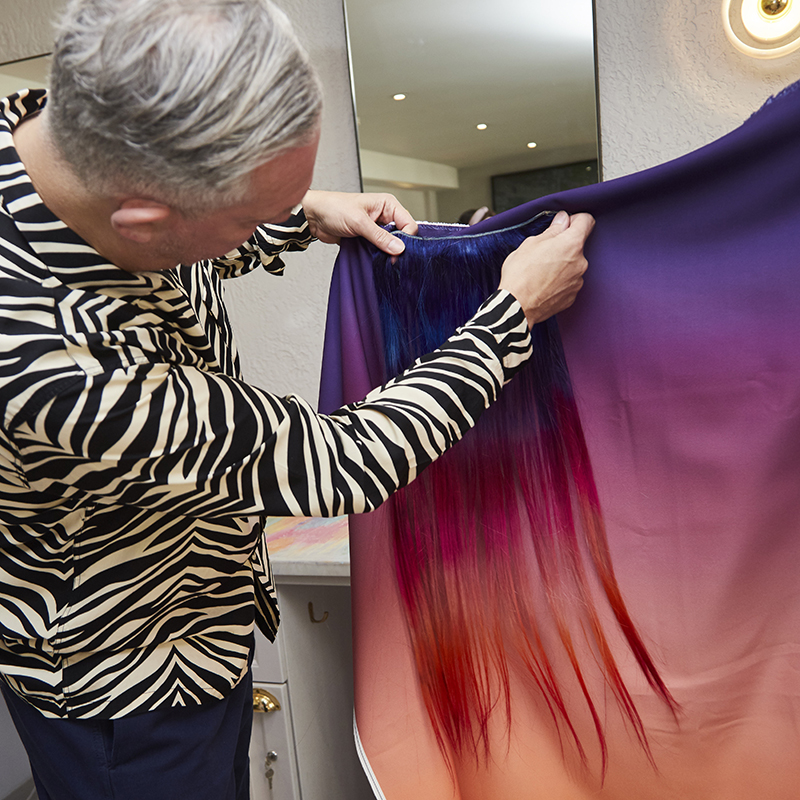 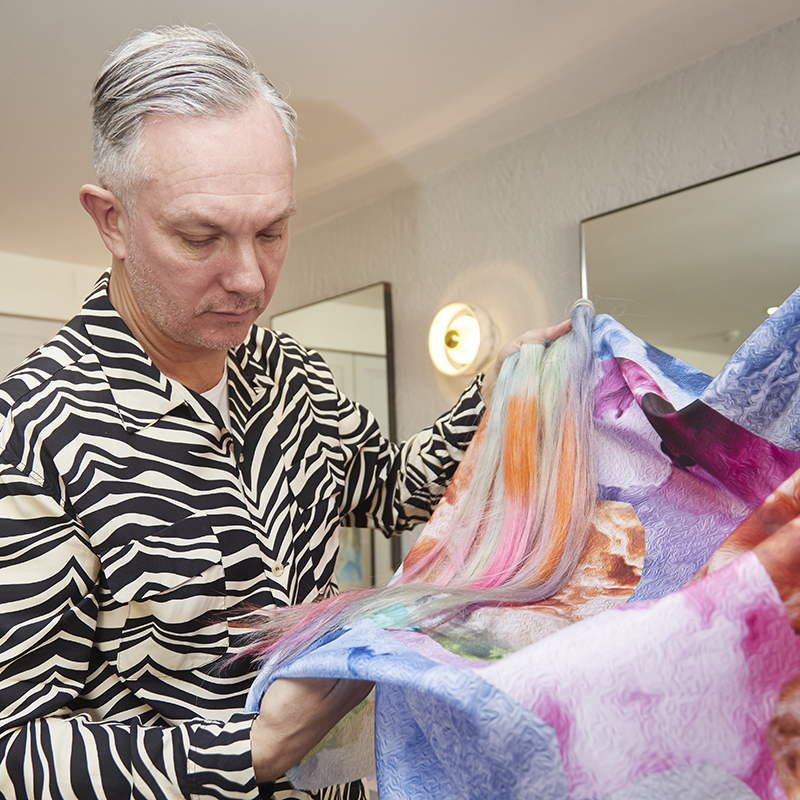 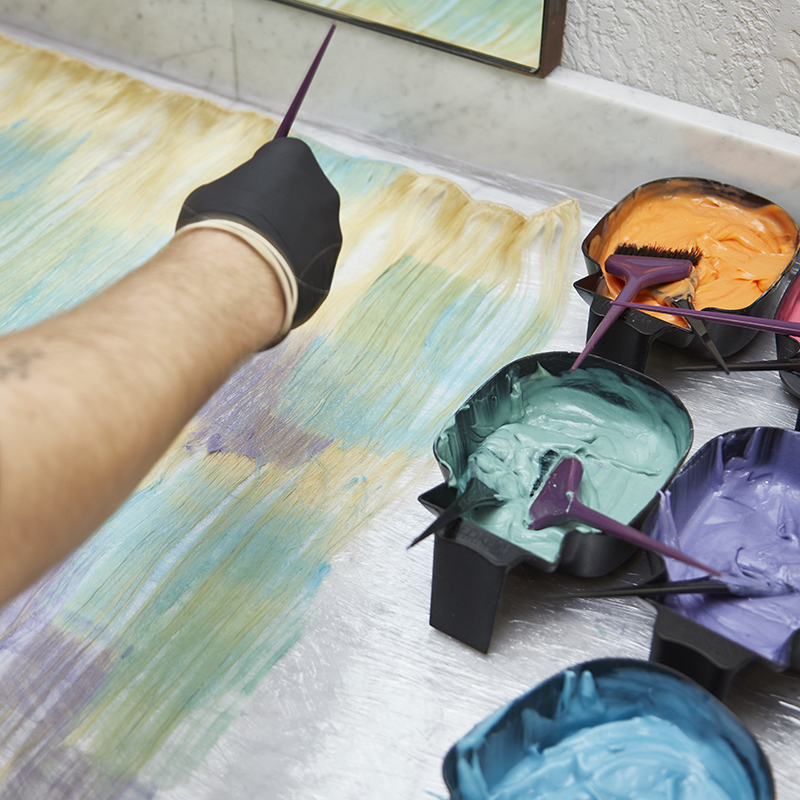 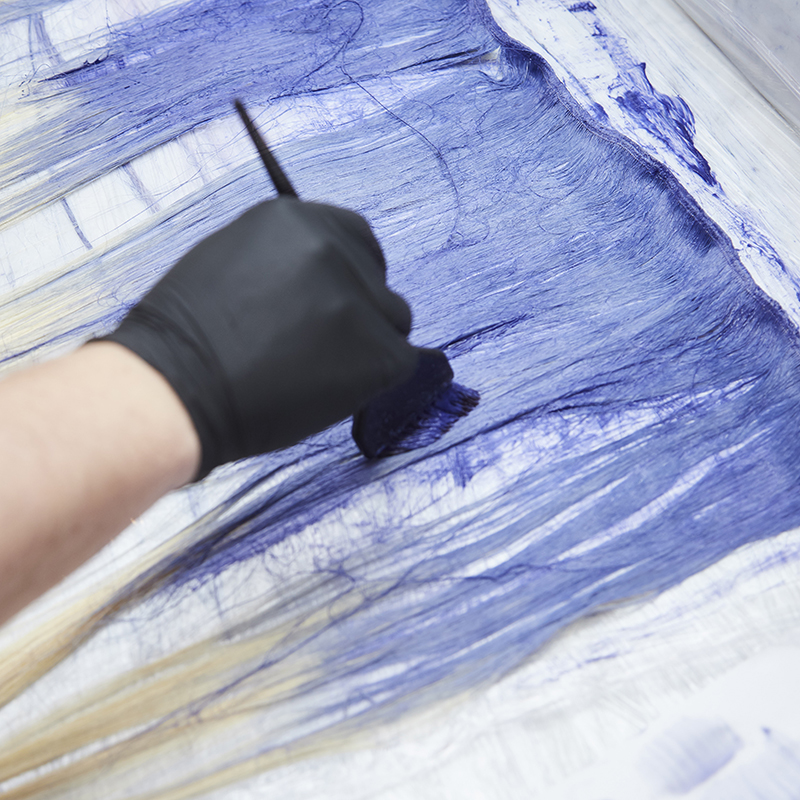 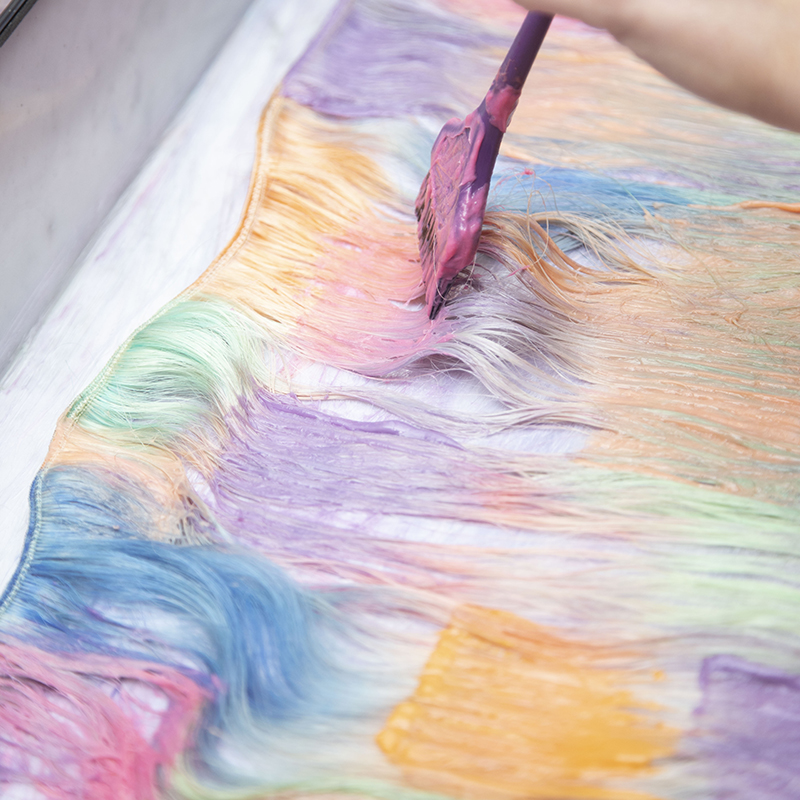 “We created little spheres using the rollers, then pushed the edges out with our fingers,” Josh continued. “Mary was keen that the effect was painterly and not ‘festival’, with muted and blended tones rather than defined shapes.”

“The other technique that we created is called ‘Horizon Colour’, he continued. “It’s a bit like an ombre, but there’s a focal point in the middle rather than at the root or at the end of the hair.

“We had to kind of make it up as we were going along, but we eventually coloured all the hair and then went back in and bleached a horizon line into it because we couldn’t get the blend to go from dark to mid-tones to light and then restart, going from light to mid to dark. The only way to do was to create a kind of bleach blur line. across the centre. For that we used Redken Flashlift, and to create the colours we used every single shade in the City Beats range.” 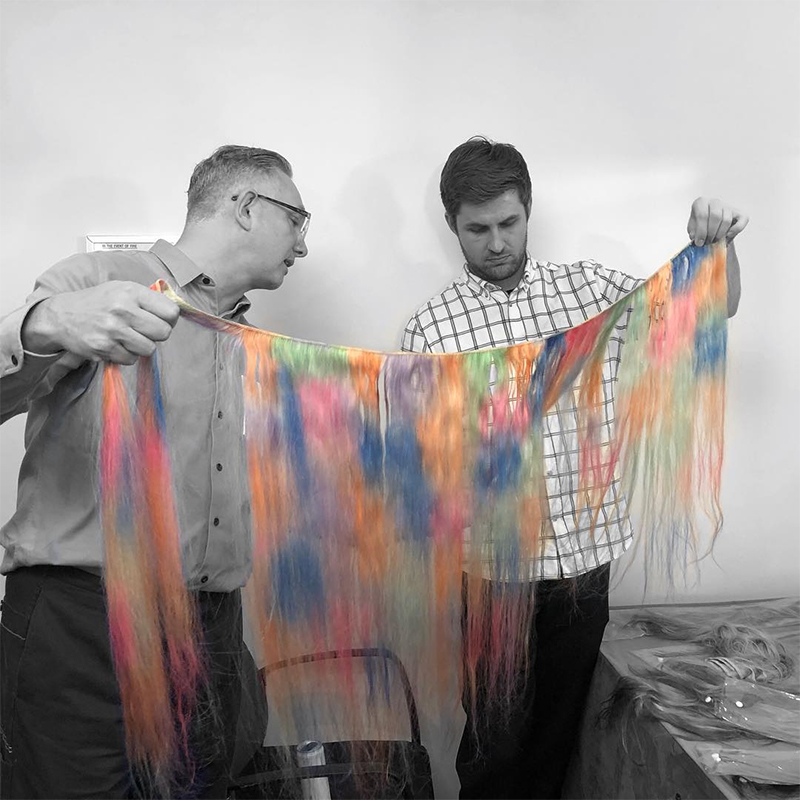 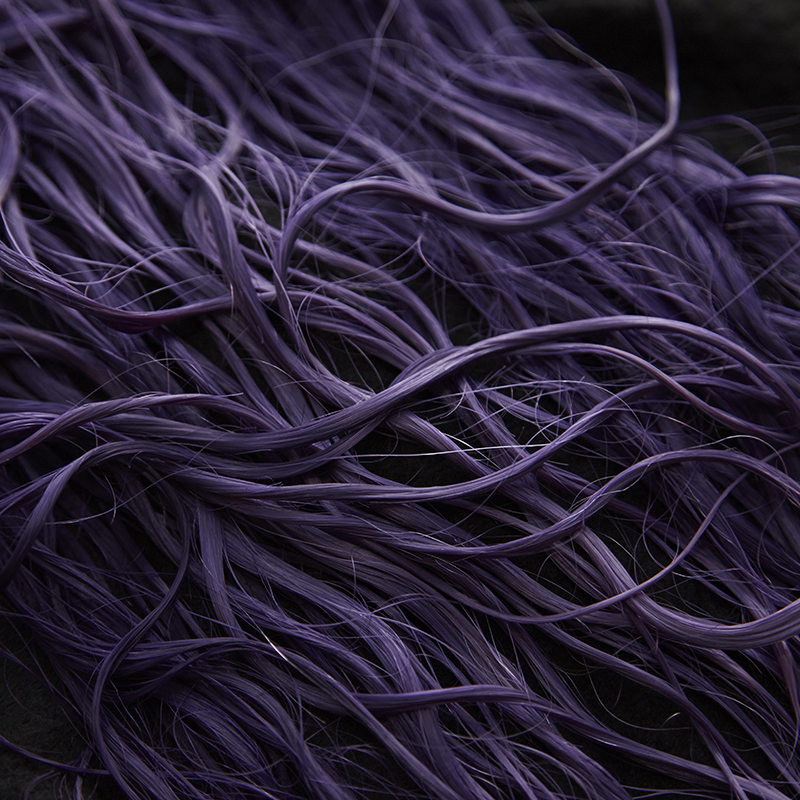 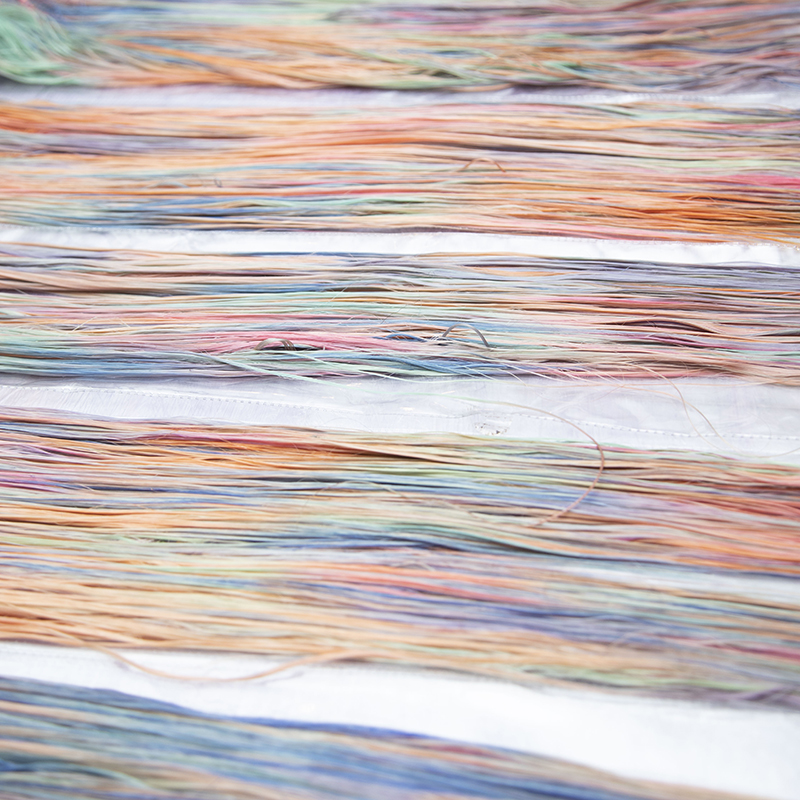 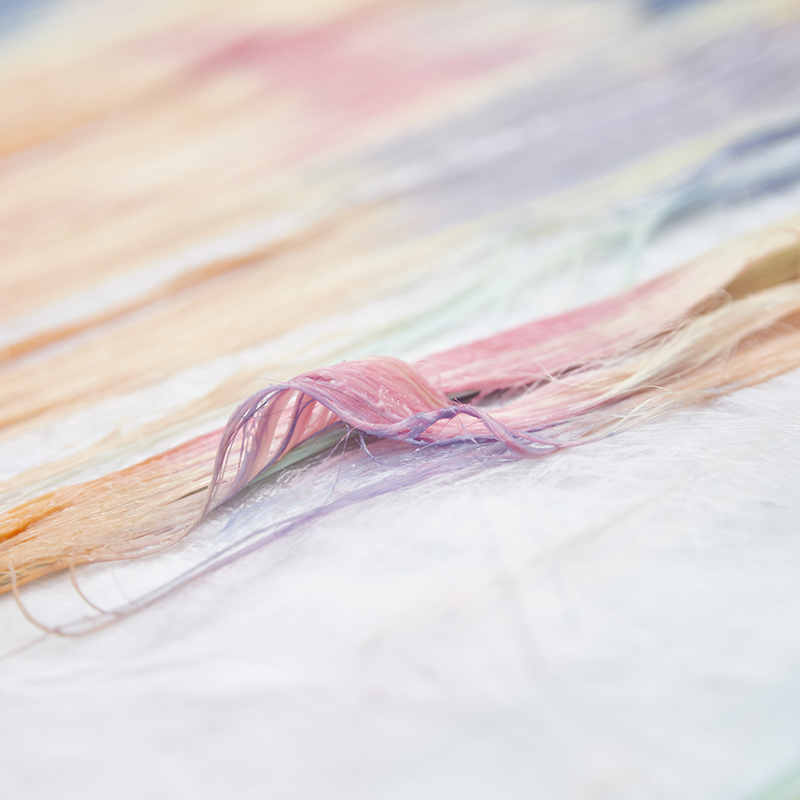 Josh’s first assistant and It List Fashionista 2018, Mads-Sune Lund Christensen, broke down some of the formulas for us backstage.

“We used 25 packs of extensions; enough to do 50 models’ hair,” he explained. “For the greens, we played a bit with the Time Square Teal, a bit of the High Line Green and added a bit of the Yellow Cab to create a more customised shade.

“The beauty of City Beats is they are so intense and this means that we have been able to control fade across certain wefts by using Clean Maniac Hair Cleansing Cream and a little bit of hot water to dilute them. This has been useful on the Horizon Colour wefts,” Mads added, “making sure the fade is smooth top to bottom.”

In fact, we witnessed this very process, as Josh led us to the make-shift colour lab backstage at the show (a sink in the men’s toilets – the glamour!) where he worked on muting the ends of a green weft.

“For the Cloud wefts,” Mads continued,  “we used a lot of Clear in the mix to take things more pastel. For the pinks, for example, we mixed it with City Ballet Pink, a drop of Big Apple Red and the tiniest bit of Midtown Magenta.” 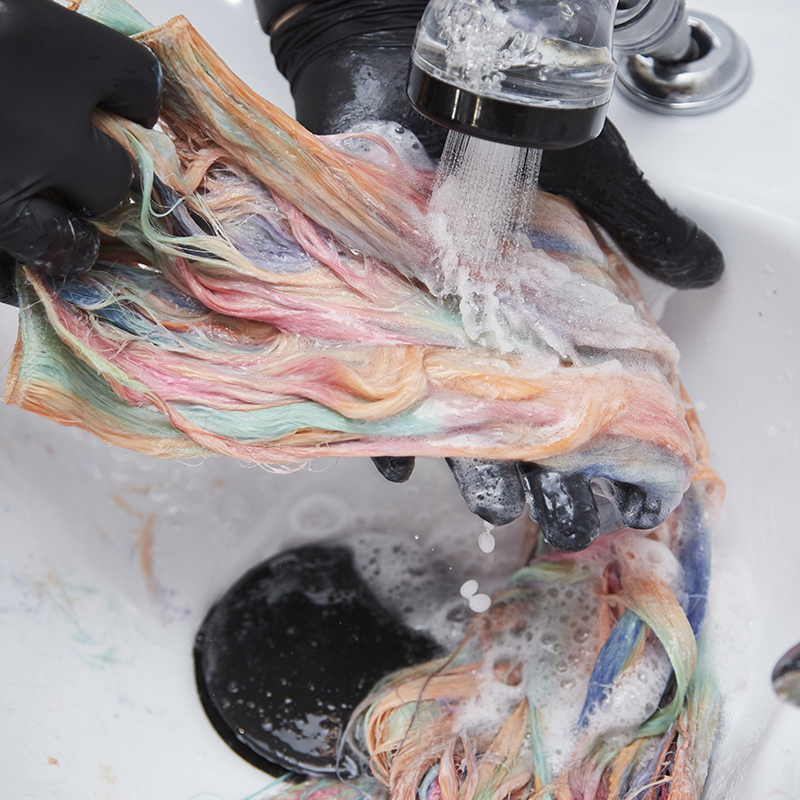 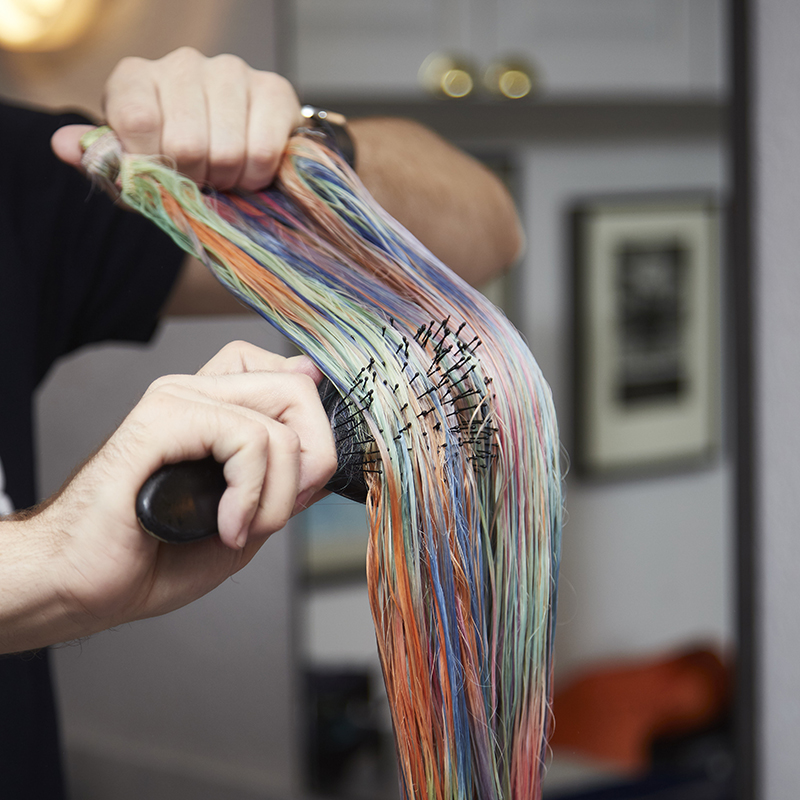 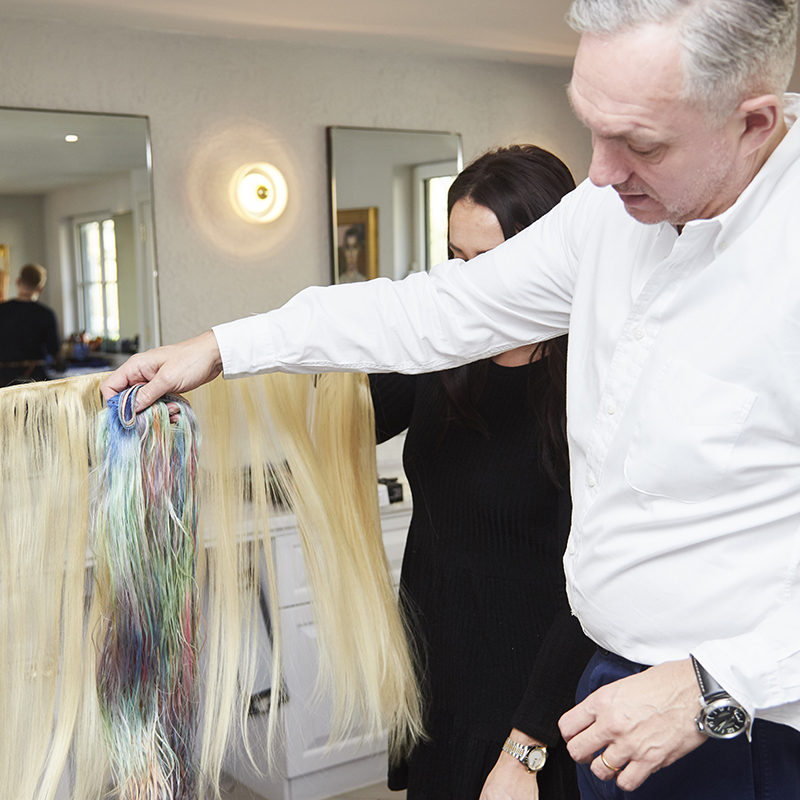 To create the finished look, the team applied wefts all through the models’ hair, but not higher than the round of the head. The edges were razored once they were secured in place, to help them seamlessly blend with the girls’ natural lengths.

Anthony Turner and his styling team then created the final texture, creating a piecey, grunge shape with product dried in at the roots.

“The idea is that the models’ own hair colour diffuses the effect,” said Josh. “It make it more ethereal. Then, when they walk the runway and you see it alongside the clothes, you get little hints of the colours as the strands move. It makes you take a second look as the shades really mirror the tones and blends in the fabric, and it all slots together, without your eye really registering why.” 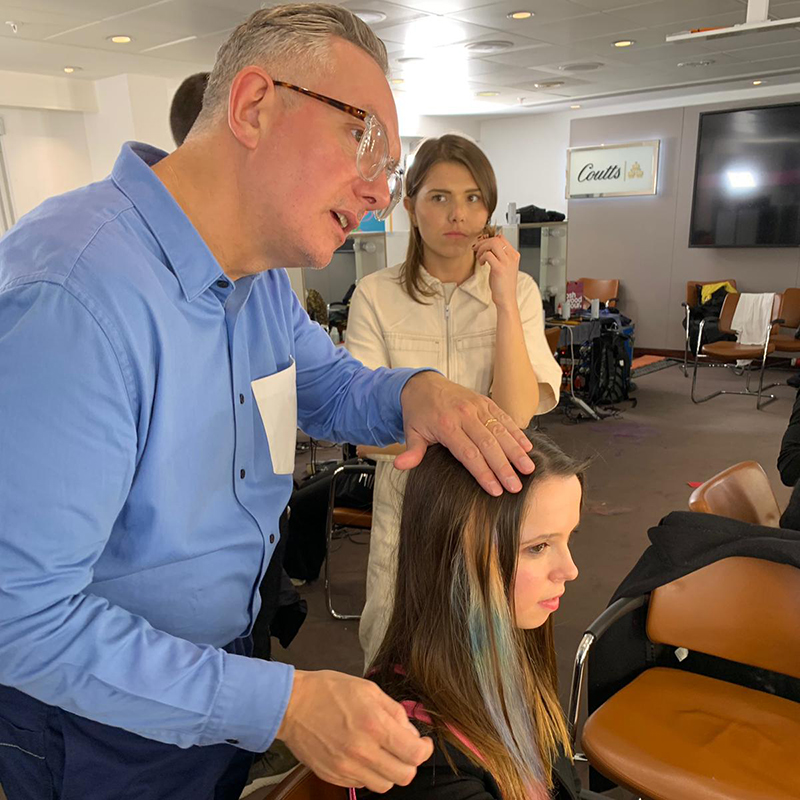 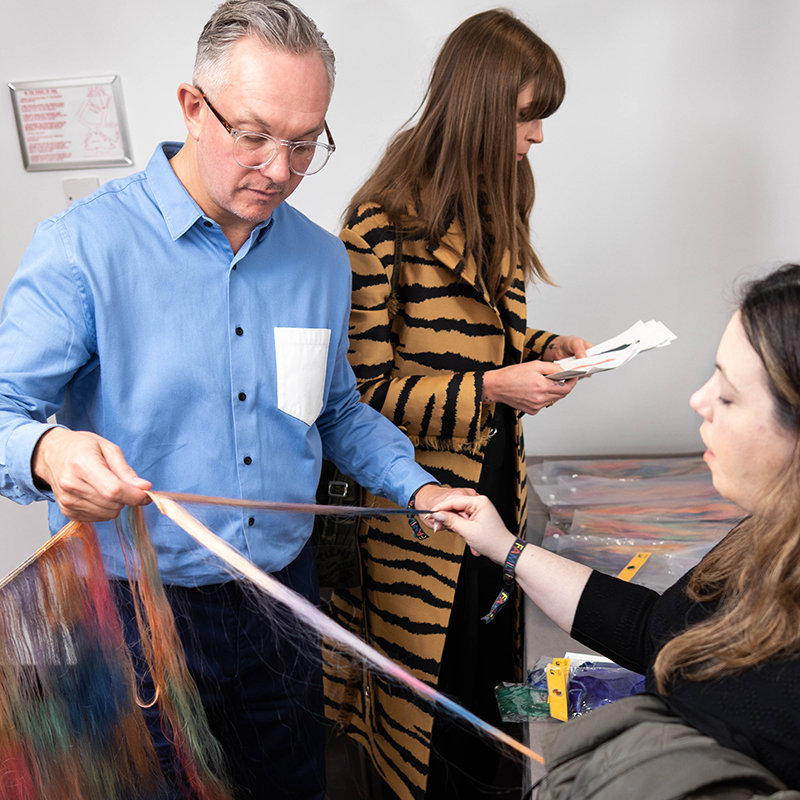 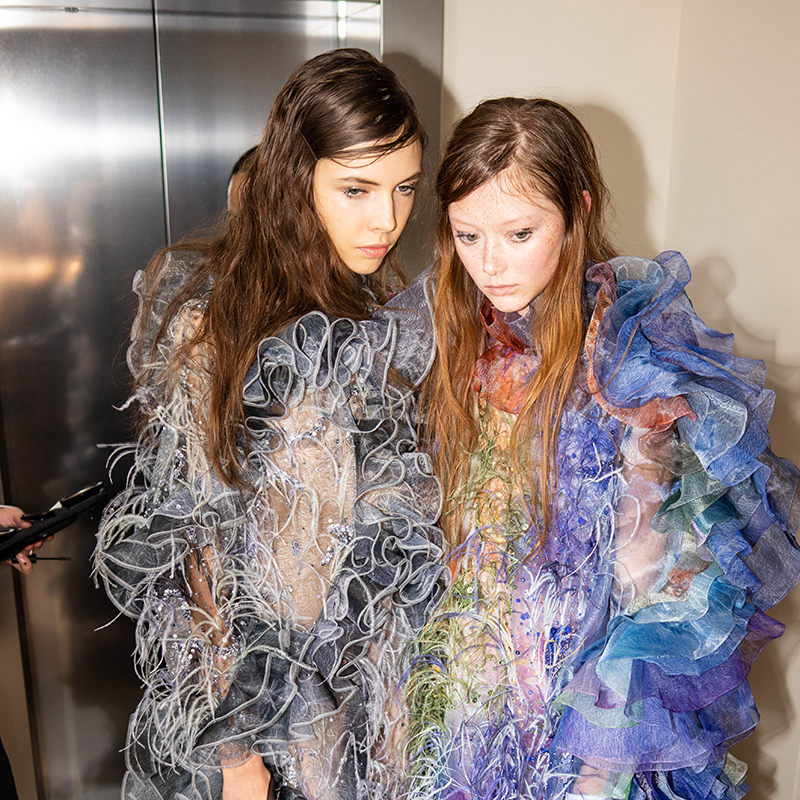 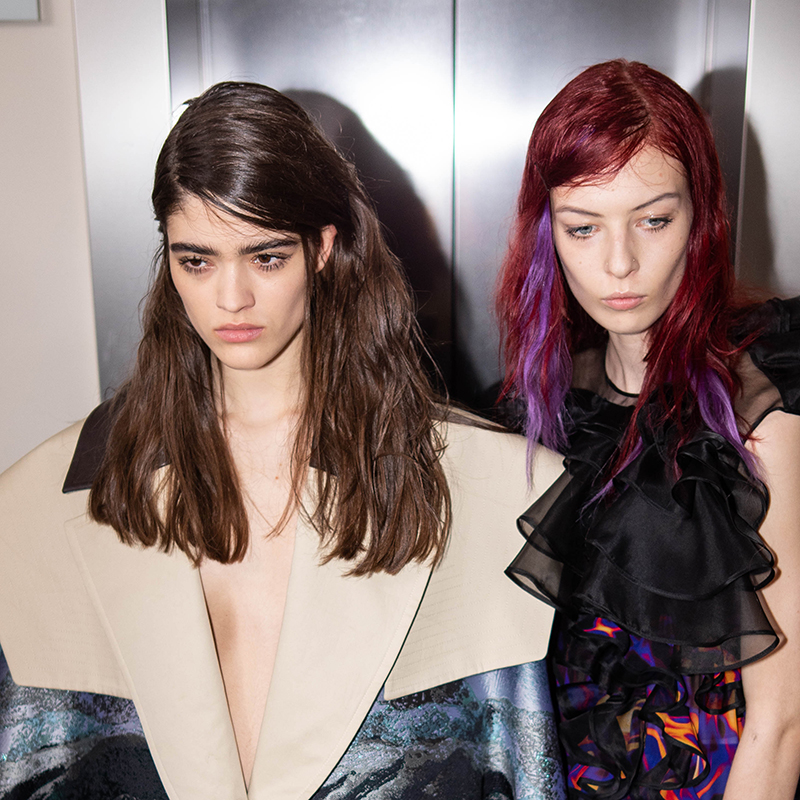 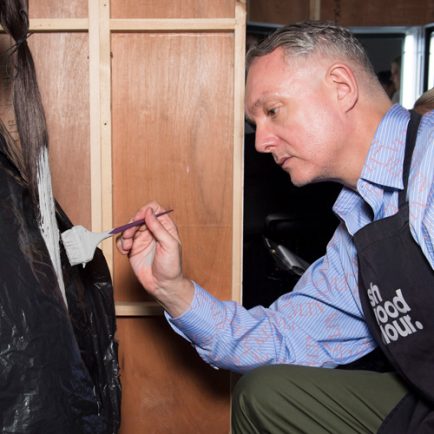 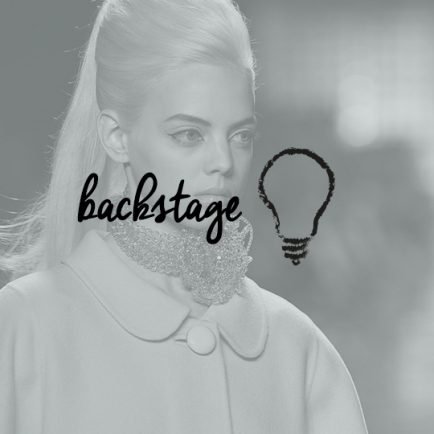 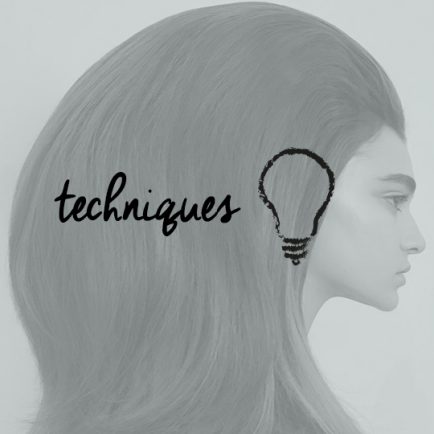