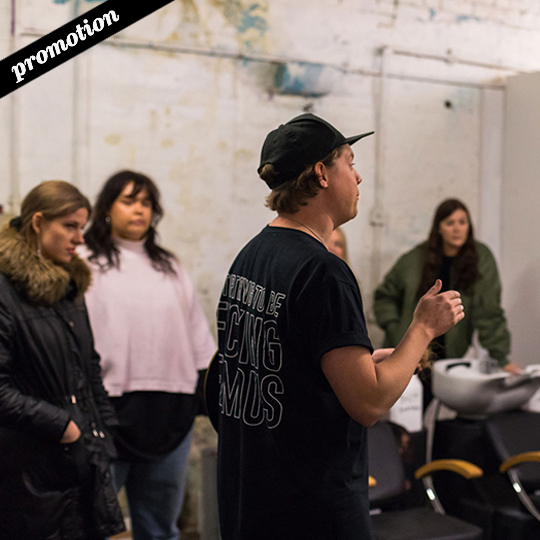 There may have been one man’s name on everybody’s lips on the night, but it took an army to put together Creative HEAD’s ‘Something Sub-standard’ event, hosted by Ky Wilson… 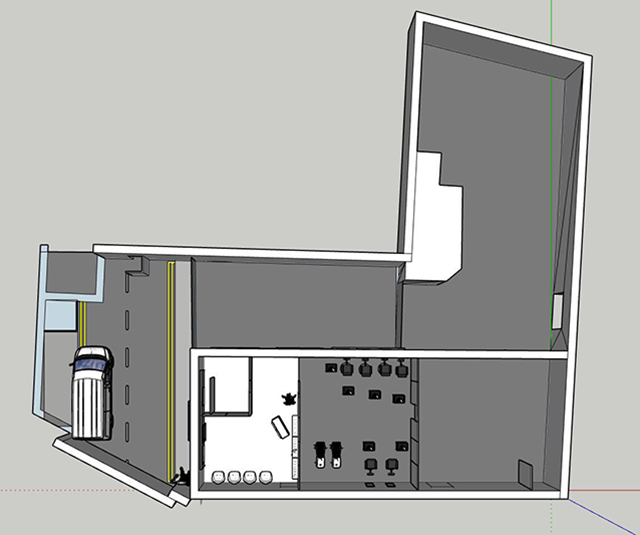 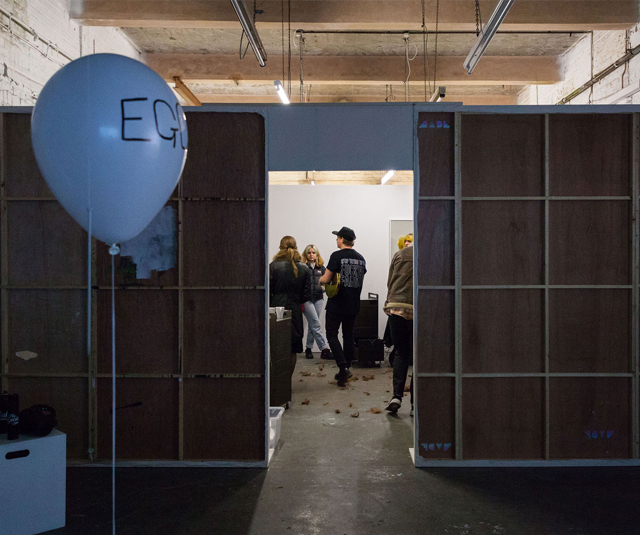 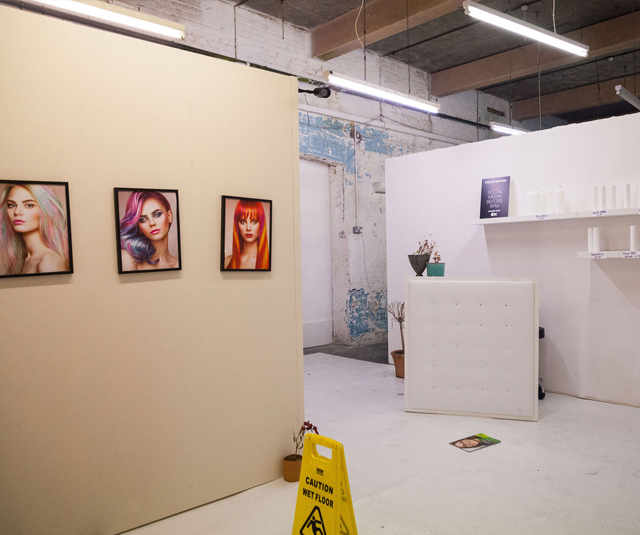 Designing and constructing a full-scale fake salon set for the evening was no mean feat. “We had to track down someone that could build it in the way I envisioned and within budget,” says Ky. In stepped event and TV construction manager Charlie, whom Ky has known for years.

“He actually used to help me build my cardboard set-ups for my pop-up salons* years ago,” Ky explained. “He was a huge part of this project from start to finish; creating visualisations and plans of the set up and then helping it all come together on the day.”

Carpentry, painting, lighting, assembly – the compact build crew managed to drill, screw, tape and transform the derelict warehouse space – sourced by Creative HEAD back in the summer – into a series of separate rooms and a salon exterior in just a matter of hours.

*Back in 2014/2015, Ky ran a series of pop-up salon experiences in public places – bars, pizzerias and the like – that were modelled on the interior of his parents’ house back in Kendal. Entire rooms was constructed out of cardboard in the spaces, and each included quirky features like a TV-frame mirror (living room) and full-size cardboard cooker (kitchen). 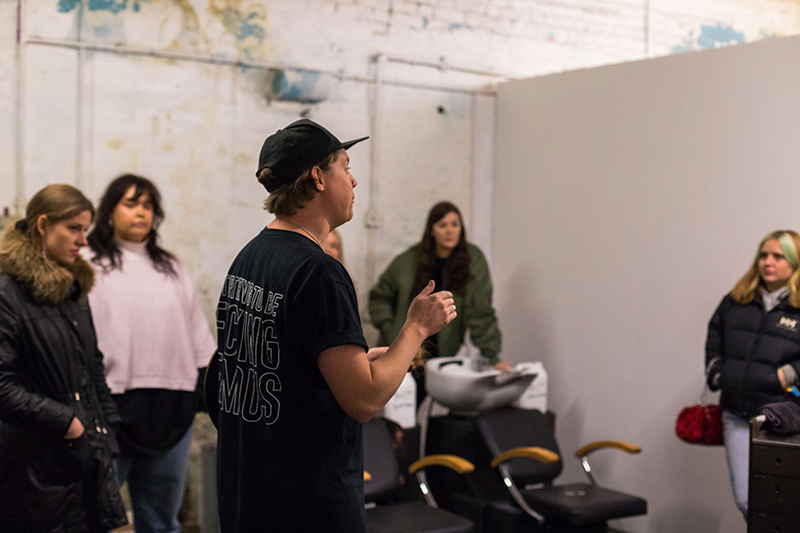 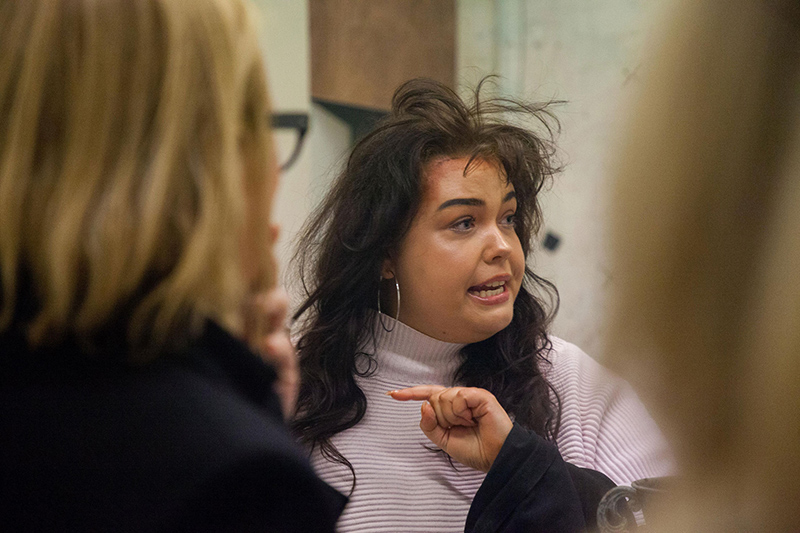 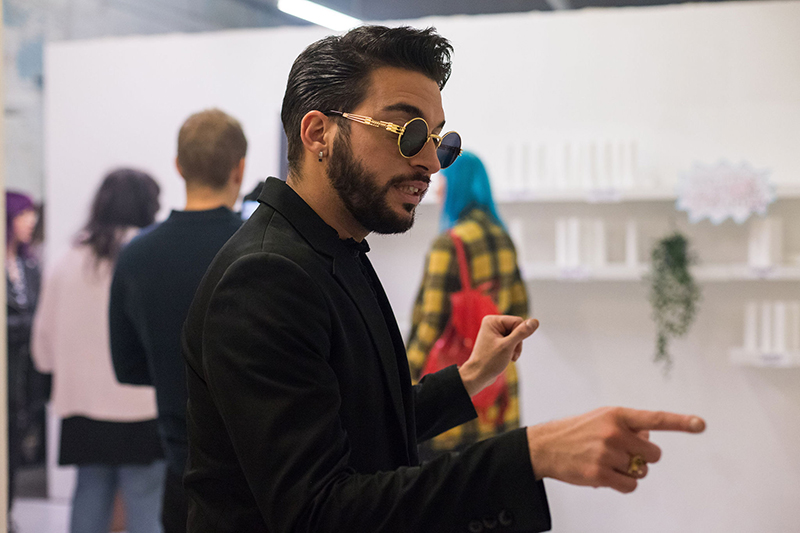 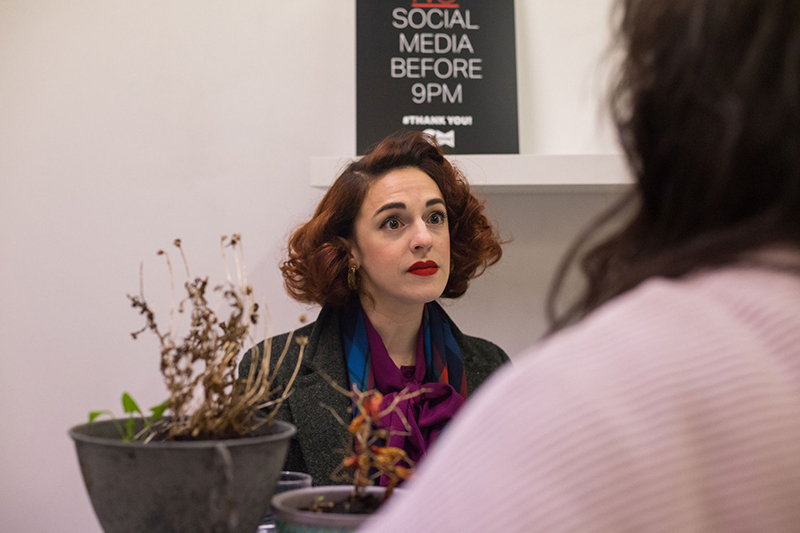 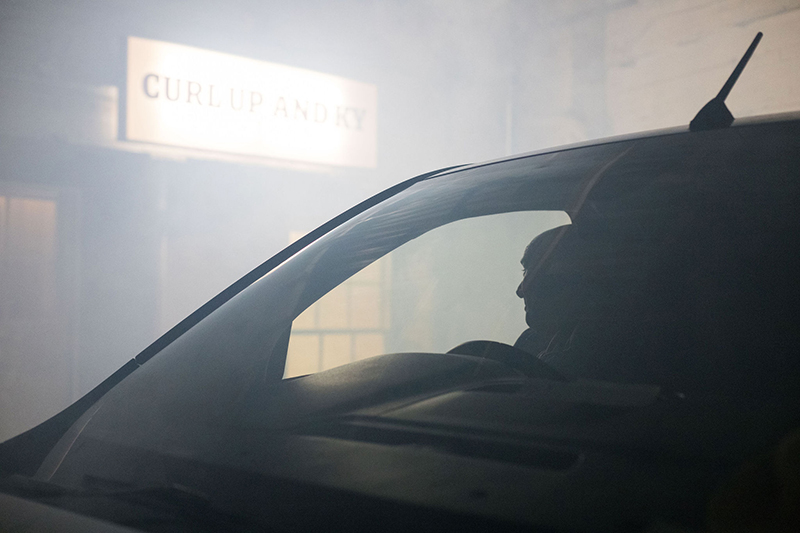 A 16-strong team helped bring the #badsalon segment of the evening to life. Alongside a handful of real hair pros populating the space were a troop of actors who ramped up the uncomfortable atmosphere and antagonised the event guests.

Recruited via a Creative HEAD casting call, the mix of professionals and enthusiastic amateur thespians (including cabbie Les and Creative HEAD intern Bella) were briefed by Ky and then used a single rehearsal day to choreograph a range of scenarios that mimicked elements of a disastrous salon visit.

“The actors had a really loose environment and set of rules to work with,” Ky explained. “There were designated ‘lookouts’ though – like Abby who sat in ‘reception – whose job it was to make sure everything ran smoothly in terms of encounters with other actors, including nightmare client Alexa. They sort of seamlessly helped event guests progress through their ‘salon’ visit and kept the pace of it all manageable.”

Each actor on the salon floor was given a character role to riff off – ranging from ‘ill assistant’ (who gave sloppy shampoos and fake-sneezed on guests at the backwash) to flamboyant star stylist (an award-winning artist desperate to be creative, even if it means ignoring client requests) – and a central brief to rile guests to breaking point. After one final pep talk a couple of hours before the event kicked off, the stage was set for a truly awful experience… 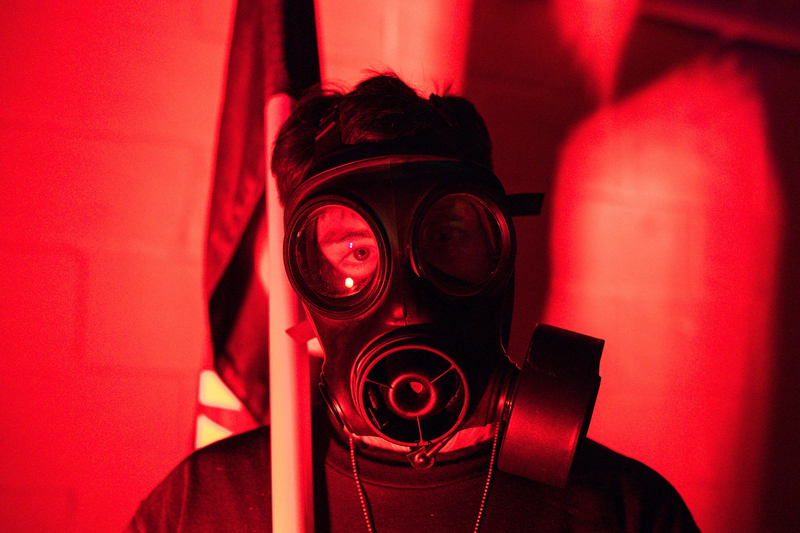 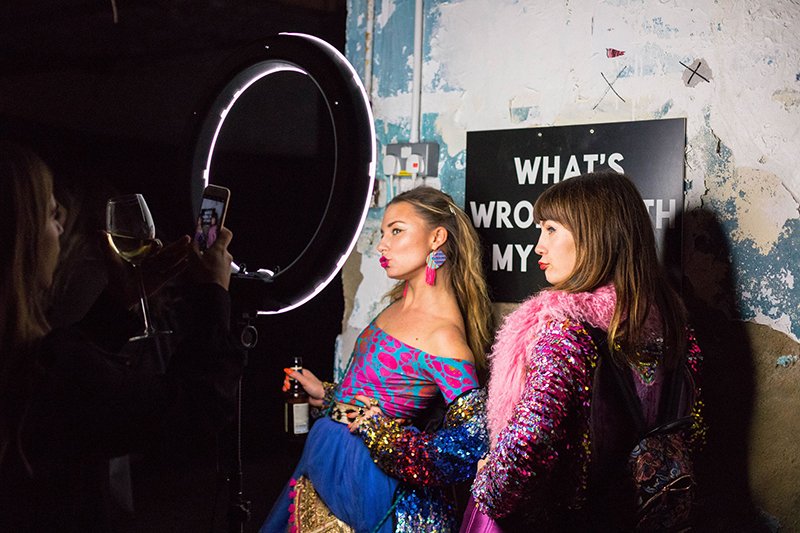 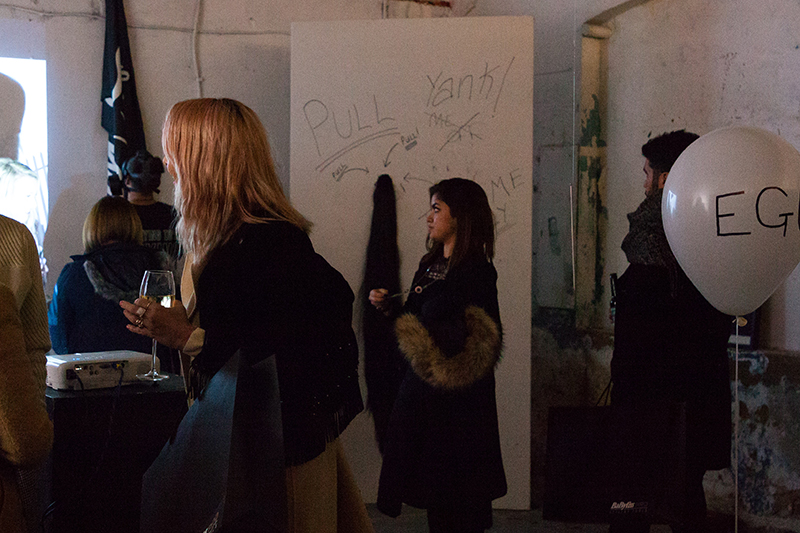 As guests stumbled off the dingy salon set, many of them were greeted by a two women in an altogether more vibrant mood. “I used to live with Twinks,” said Ky “and I wanted to get her involved straight away, but it was all a bit too dark for her – she’s a very colourful person! Chatting away and having a good time is very much her thing, so she and Alex (who actually has a company called ‘The Provibers’, which specialises in creating a great atmosphere for events) were perfect for lifting the mood again as people mingled, took in the messages in the installation and contemplated what they’d just experienced.”

We can also reveal that the mysterious man in the gas mask was Tom Fallon, a fellow hair professional who Ky met on a job, and that the face behind the screams at the extensions ‘glory hole’ was hairstylist Jayde Collins. Providing props for both; Luke Pluckrose, wig-craftsman extraordinaire. 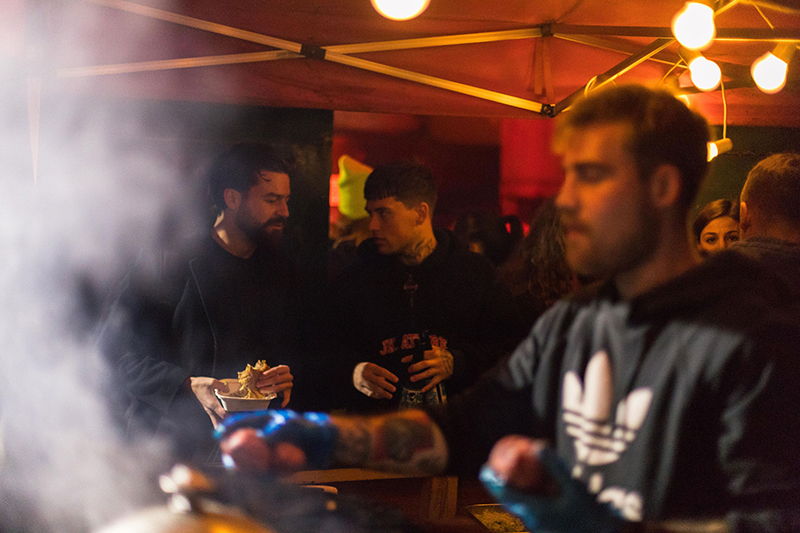 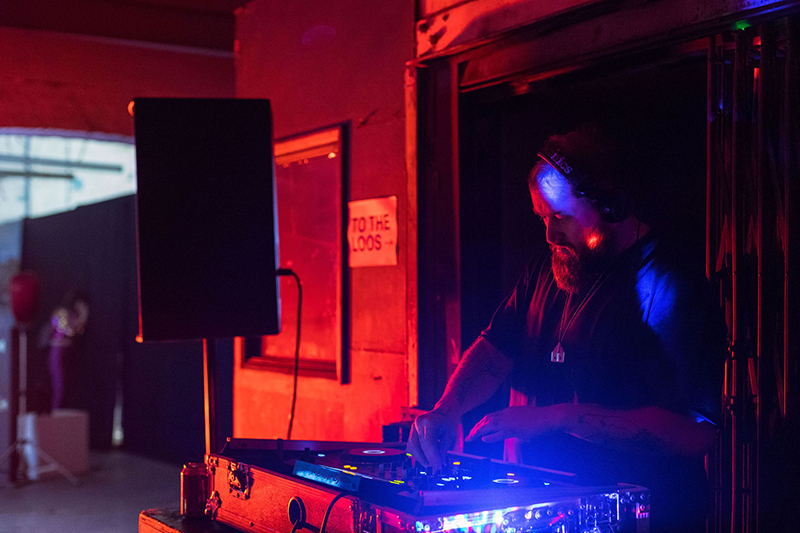 Refreshment, sustenance and banging after-party tunes came courtesy of Tom from roaming disco and burger joint Burger Bear. “Burger Bear were one of the first places I did my salon pop-up a couple of years ago,” Ky explained. “And actually, a memory came up on my Facebook feed the day after this event saying it’d been five years since that pop-up!”

“We’ve done a clipper necklace collaboration in the past and he had literally just got back from running a pop up in the Lake District, in a pub right next to where my salon is based. He called in a favour to get the DJ equipment sorted and just did his thing.” 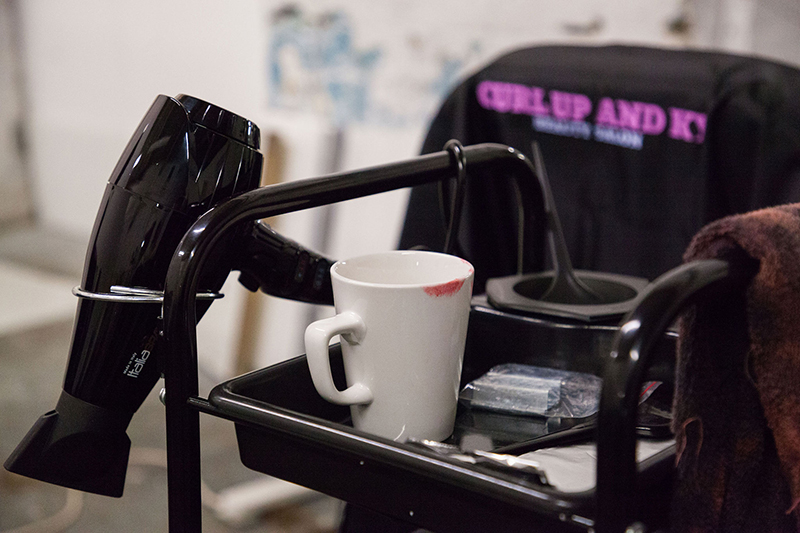 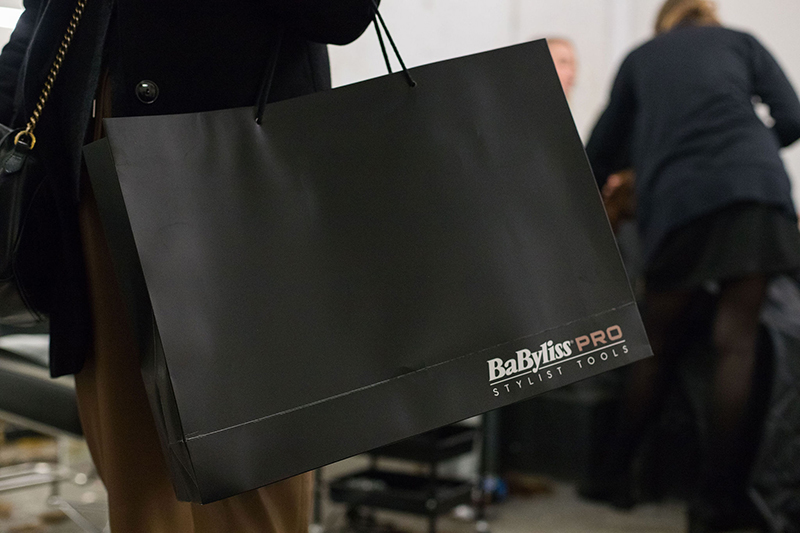 “I’ve gotta give a massive shout out to BaByliss PRO too,” said Ky of the event sponsors. “The freedom they and Creative HEAD gave me throughout is the reason we were able to make this whole thing happen.”

As well as generously providing electrical tools for every single guest to take home, BaByliss PRO kitted out the #badsalon area with (very much in working order!) dryers, tongs and clippers for the ‘staff’ to use. And their PR team were even game enough to go through the client experience themselves – for that alone, we’ve got to give them major props!

Other than the professional actors, everyone listed above gave up their time and labour for this project free of charge or for a reduced rate. Ky is hugely grateful, and is conducting a skills swap as payment – providing free haircuts (his time and skills) for those who helped make ‘Something Sub-Standard’ a reality. 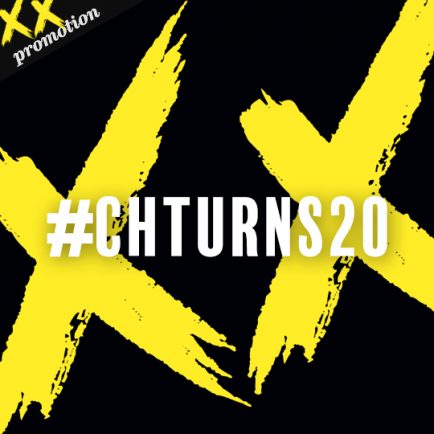 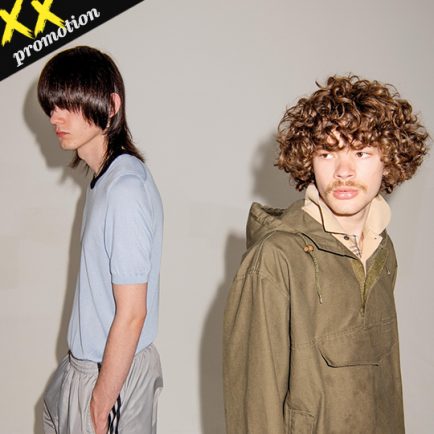